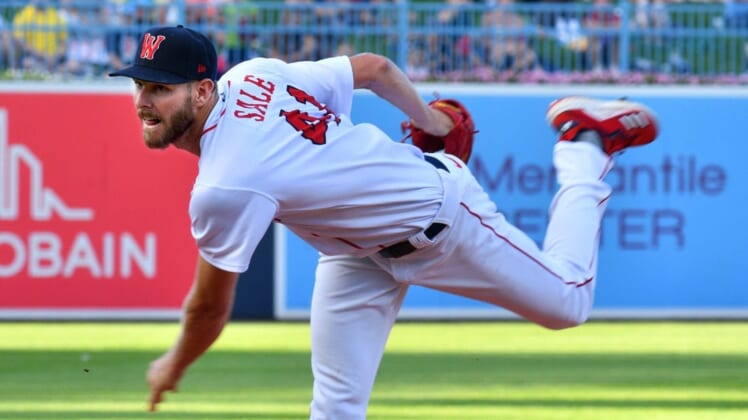 The Boston Red Sox are hoping to get a major boost to their rotation with the return of Chris Sale on Tuesday night.

Sale, a seven-time American League All-Star, will make his major league season debut in the second meeting between the Red Sox and Tampa Bay Rays in St. Petersburg, Fla.

In the teams’ first meeting of their four-game series, Boston rallied from a 5-1 deficit to force a tie, but Tampa Bay plated five unanswered to win 10-5. The Rays snapped a three-game losing streak while the Red Sox fell for the fifth time in seven games.

Rays leadoff hitter Yandy Diaz went 3-for-3 with two doubles, three runs and three RBIs, including driving in the game-winning tally in the sixth inning.

“I’ve just been working hard in the cage with my routine,” Diaz said. “I’m glad I’m getting the results after all that work.”

Batting .307 this season, Diaz is 20-for-39 (.513) with eight doubles in July. However, the third baseman is now without the Rays’ regular shortstop beside him. Wander Franco is due to undergo surgery on his right wrist on Tuesday, and he is expected to miss five to eight weeks.

In his final rehab start for the Triple-A Worcester Red Sox on Wednesday, Sale did not have his top command. He tossed 3 2/3 innings, allowing one run on three hits to go along with five walks and five strikeouts.

Afterward, Sale was caught on video taking out the frustration of his wildness on the Worcester facility, destroying property in a tunnel tantrum.

Per WBZ-TV in Boston, Sale reportedly spent more than $6,000 on lunch and dinner for the affiliate and agreed to pay $1,100 to replace the broken television he further damaged.

The southpaw hasn’t pitched this season due to a rib injury suffered in spring training. He also had Tommy John surgery in March 2020.

After employing a bullpen game in the series opener, Tampa Bay will send out Corey Kluber (4-5, 3.62 ERA) to duplicate his performance last Wednesday in Boston.

Kluber, who reaches the 10-year service milestone Wednesday, matched his best outing of the season with six innings of three-hit, shutout pitching. He turned in the same showing on May 4 in a no-decision at Oakland. Against Boston, Kluber struck out five without issuing a walk.