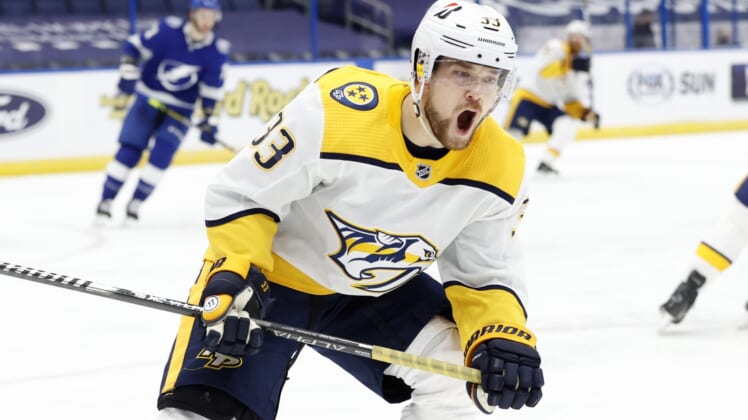 Ondrej Palat, Gourde and Brayden Point all connected for goals in the opening period, setting the tone for Tampa Bay’s fourth straight home win, and second straight overall, while keeping Nashville winless on the road in four tries.

Stamkos, who also collected an assist, zipped in his fourth goal from his usual spot — the left circle — 42 seconds into the team’s fourth power play at 7:23 of the second period to make it 4-0.

In scoring on the man advantage, the captain moved past former teammate Marty St. Louis with 301 power-play points to set the team record.

Gourde added an empty-net goal with 16 seconds left, and goaltender Andrei Vasilevskiy allowed two goals on 27 shots in his 33rd consecutive start, while moving to 5-1-1.

Eeli Tolvanen scored in his season debut, Mikael Granlund each scored a goal and Juuse Saros stopped 21 of 25 shots in losing to Tampa Bay in regulation for the first time ever (2-1-1).

Nashville also lost for the fifth time in its past seven games.

After each club killed off a power play in the game’s first seven minutes, Stamkos banked the puck off the boards to create a two-on-one. After sliding defenseman Roman Josi initially broke up Stamkos’ pass, the puck bounced to Palat.

The left wing backhanded in the puck into the net at 9:13 of the opening period for a 1-0 advantage. It was the third time Palat has produced his team’s first goal of the game.

Just as Tampa Bay’s second man advantage expired, Tyler Johnson slid a pass to Gourde, who was slicing through the low slot. He chipped the puck inside the far post for a 2-0 lead at 13:59.

Point and Mathieu Joseph capped the period by passing the puck to each other on a two-on-zero breakaway, and Point finished off a buzzer-beater with .4 seconds left for a 3-0 lead.

Without a goal since December of 2018, Tolvanen scored for the second time in his career when he beat Vasilevskiy on the short side 2:53 into the third on a crisp pass from Erik Haula from behind Vasilevskiy. Granlund scored on a rebound at 5:41 of the final period for Nashville.