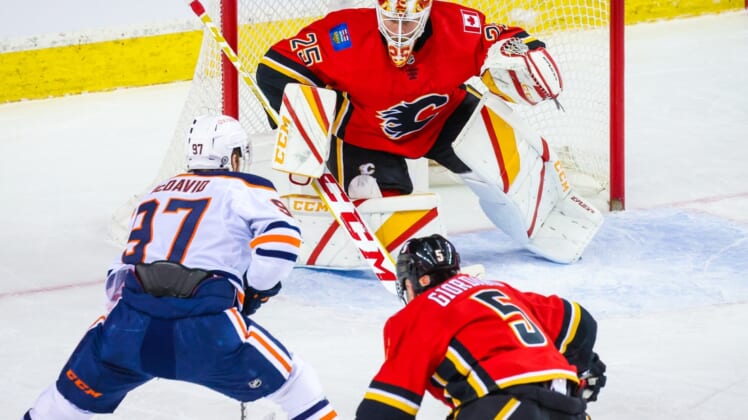 Connor McDavid produced one goal and two assists and Tyson Barrie tied a career high with four assists to lead the visiting Edmonton Oilers to a 7-3 trouncing of the Calgary Flames on Wednesday night.

Leon Draisaitl recorded three assists while Jesse Puljujarvi, Ryan Nugent-Hopkins and Darnell Nurse each had a goal and an assist for the Oilers. Edmonton’s Dominik Kahun, Zack Kassian and Alex Chiasson also scored, and goaltender Mike Smith turned in a 30-save performance.

The Oilers, who have twice this season scored seven goals on the Flames, ended a two-game losing streak. The Flames saw their modest three-game winning streak end and fell for the first time in four games under new head coach Darryl Sutter.

Edmonton received the strong start it wanted when Nugent-Hopkins opened the scoring. McDavid intercepted Milan Lucic’s clearing attempt and sent a pass to the side of the net for Nugent-Hopkins to finish at 4:39 of the first period.

Puljujarvi doubled the lead on the power play a few minutes later when he set up in front of the net and deflected Barrie’s point shot.

Kahun benefited from yet another glaring Calgary turnover when he scored to make it a 3-0 game before the midway point of the clash. The hosts were much better in the period until Mikael Backlund lost the puck inside his blue line, and Draisaitl’s nifty touch pass set up Kahun in the right circle at 8:39.

Lindholm replied 25 seconds later to put the Flames back in the game, but any comeback hopes were dashed when the Oilers scored two more power-play goals early in the third period.

McDavid extended the lead 110 seconds into the frame and then Chiasson made it 5-1 with a deflection goal at 3:44 of the period. Nurse added another goal two minutes later, and Kassian made it a 7-1 game with a goal in his first game back after missing 17 due to a broken hand.

Backlund and Gaudreau both scored late goals for the hosts in the blowout.