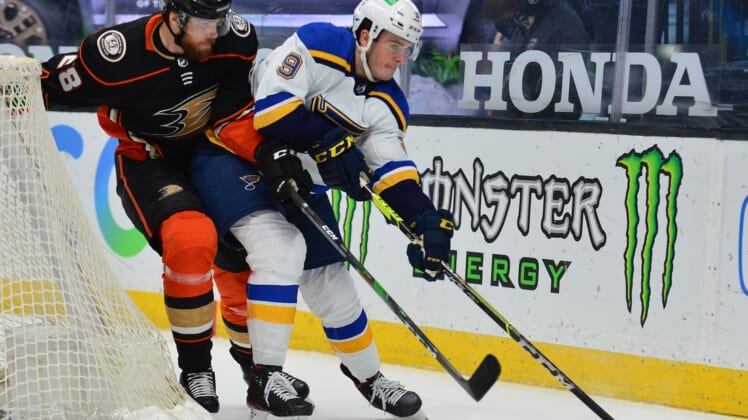 First the St. Louis Blues won on the lead then they triumphed off the pace, defeating the Anaheim Ducks 4-1 on Sunday to complete a successful back-to-back set between the teams at Anaheim, Calif.

The Blues used second-period goals from Brayden Schenn and Sammy Blais to overcome an early deficit and win two days after they blitzed the Ducks right from the start in a 6-1 victory. Schenn finished with two goals in the Blues’ third consecutive victory overall.

The Ducks had a first-period goal from Jakob Silfverberg, but lost their third consecutive game and fell to 2-3-1 at home.

The Ducks fell again, but they seemed to make modest progress. In Friday’s defeat, they gave up three goals just 2:06 into the game, while facing six shots. Goaltender John Gibson was pulled after the third goal.

Gibson was back in net Sunday, but didn’t face his first shot until he made a save on Shenn with 9:04 remaining in the first period. By then, the Ducks led 1-0 when Silfverberg scored a power-play goal 4:54 from the start, his third.

The Ducks had a 7-6 advantage on shots in the opening period and still had the lead toward the midway point of the game before the Blues took over.

Schenn tied it 1-1 midway through the second period, giving him a point in each of his last seven games. St. Louis then moved in front 2-1 at 14:59 of the second period on Blais’ goal, his first. Blais had been a healthy scratch in the three games before the Blues arrived in Anaheim.

Schenn’s second of the game and sixth of the season came at 1:07 of the third period. He also had two assists Friday. Colton Parayko scored just over a minute later for the Blues, his first.

Rookie Blues goaltender Ville Husso made 25 saves for his first career win in his second career start and third game. He gave up a combined nine goals in his first two appearances.

Gibson made 19 saves for the Ducks in his third consecutive loss after the Ducks earned a point in his first three games. The Ducks did finish with a 26-23 advantage on shots.