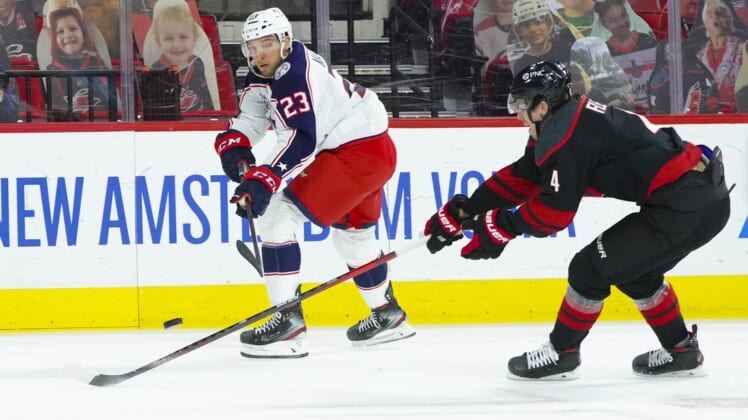 Seth Jones scored 4:09 into overtime to give the visiting Columbus Blue Jackets a 3-2 victory over the host Carolina Hurricanes on Thursday in Raleigh, N.C.

Columbus improved to 3-7 in games that required overtime or a shootout this season. It was the fourth straight Blue Jackets game that has gone beyond regulation time.

After an eight-game winning streak, the Hurricanes are now 0-1-1 in their last two games. It was a rare setback on home ice for the Hurricanes, who are 10-1-2 in their own building this season.

Jones’ overtime winner was the second of two goals on the night for the defenseman, who recorded his first multi-goal game of the season.

Oliver Bjorkstrand had assists on all three Columbus scores. Kevin Stenlund scored the Jackets’ other goal.

Joonas Korpisalo stopped 25 of 27 shots, none bigger than a save on a Martin Necas breakaway 3:07 into overtime. Midway through the second period, Korpisalo made a highlight-reel stick save to rob Carolina’s Warren Foegele of a sure goal.

Sebastian Aho scored both of Carolina’s goals. The forward has 11 points (seven goals, four assists) over his last nine games.

Jones’ first goal of the game highlighted a solid first period for the Blue Jackets, who outshot the Hurricanes by a 14-7 margin in the frame.

Aho took control in the second period, scoring the game-tying goal just 51 seconds after the intermission break. Aho then put the Hurricanes ahead at the 12:20 mark, firing in a one-timer off a Necas pass during a Carolina power play.

The Hurricanes entered Thursday with a league-best power-play percentage (31.9). Carolina has scored at least one power-play goal in nine of its last 10 games, going 14-of-32 with the extra attacker during that stretch.

At 17:50 of the second period, Blue Jackets forward Max Domi sent a circle-to-circle backhand pass to Stenlund for the equalizer. Stenlund snapped a seven-game points drought with his fifth goal of the season.

Alex Nedeljkovic saved 25 of 28 shots for the Hurricanes.

Thursday marked the first of four straight games between the two Central Division rivals. The Jackets and Hurricanes meet again on Saturday in Raleigh.