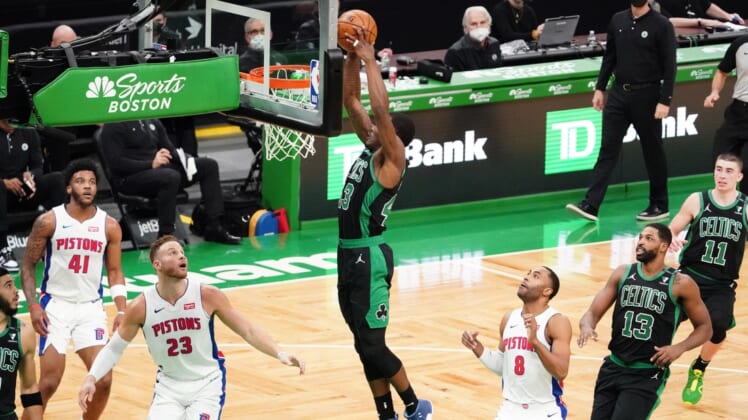 Rookie reserve Saddiq Bey scored a career-high 30 points, making all seven of his 3-point attempts in the process, and the visiting Detroit Pistons held off the Boston Celtics 108-102 on Friday.

Bey’s seven 3-pointers set a Pistons record for a rookie. He also pulled down 13 rebounds.

The Celtics rested starting point guard Kemba Walker. Forward Semi Ojeleye left the game in the second half with a sore right knee.

Griffin drew three charges and also knocked down two 3-pointers in the third quarter. When Bey came off the bench and drained another long ball, the Pistons were up by eight.

That shot started a 10-2 Detroit run to make it 82-69. Bey also finished off the outburst with his sixth 3-pointer.

Jeff Teague knocked down a long ball seconds before the end of the quarter, cutting Detroit’s lead to 10 entering the fourth.

Detroit nudged the advantage to eight with four minutes remaining. A Brown basket and two Tatum free throws cut it in half. Theis drilled two free throws with 2:10 left to make it 95-93.

Jackson answered with a 3-pointer and Tatum responded with a layup.

Wright found Bey open on the wing for another 3-pointer with 38.7 seconds left to double the Pistons’ advantage to six, 101-95.

Detroit made enough free throws to close it out.