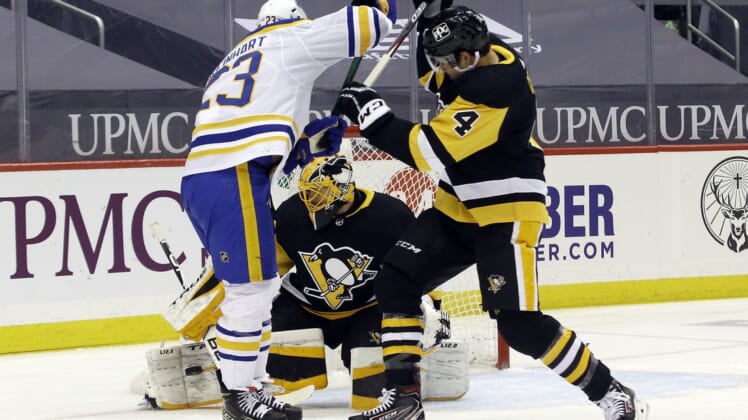 It was DeSmith’s third shutout in four career games against the Sabres. Overall, it was his second of the season, fifth of his career.

The Penguins swept games on back-to-back nights against Buffalo.

The Sabres, whose streak reached 0-14-2, have been shut out seven times this season.

Both teams were missing key components.

Pittsburgh played without winger Kasperi Kapanen, who took a puck off his left foot or ankle Tuesday. That left the Penguins without five of their top nine forwards because of various injuries.

Radim Zohorna and Jake Guentzel also scored, and Kris Letang had two assists for Pittsburgh, which is 3-0-1 in its past four games.

Dustin Tokarski, playing on back-to-back nights because of injuries among Buffalo goalies, made 27 saves.

Zohorna, making his NHL debut, gave the Penguins a 1-0 lead at 17:21 of the first. From the left hash marks and off a feed from Anthony Angello down low, Zohorna blasted his first career shot past Tokarski’s glove.

Crosby, at the left point, intercepted a Sabres clearing attempt. He sent it to Letang at the opposite point. Letang fed McCann — elevated to the top unit to fill Kapanen’s spot — in the slot, and he got enough elevation on his shot to glide over Tokarski’s stick.

McCann struck again at 8:56 of the third to make it 3-0. His wrist shot from the top of the left circle knuckled past Tokarski during a man-advantage.

Victor Olofsson beat DeSmith at 14:03 of the third, but the Penguins successfully challenged that Buffalo was offside, wiping out the goal.

Guentzel added an empty-netter with 1:05 left.