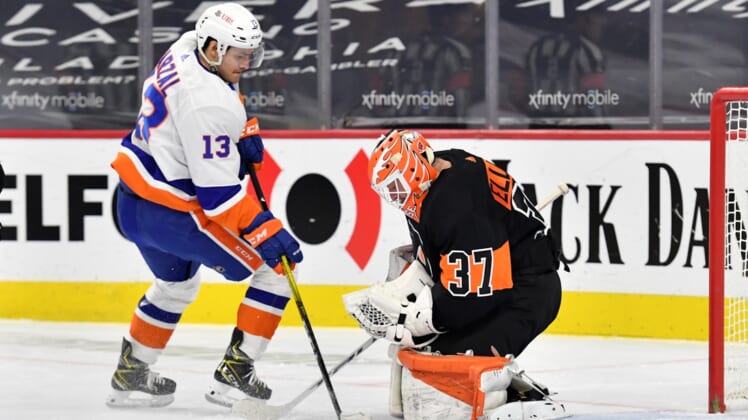 Kevin Hayes scored a power-play goal with 37.3 seconds remaining in overtime to lift the host Philadelphia Flyers past the New York Islanders 4-3 on Sunday.

Hayes’ goal was set up after New York’s Mathew Barzal was called for high-sticking with just 1:20 remaining until a possible shootout.

It was the second overtime win for the Flyers in as many nights against the Islanders.

Josh Bailey and Mathew Barzal each had a goal and an assist for the Islanders, who dropped their fifth in a row (0-3-2). Nick Leddy added one goal for New York, while Islanders goaltender Ilya Sorokin made 25 saves.

The Flyers received a two-man advantage for 1:17 midway through the first period. But they were unable to generate much offensive pressure with only one shot.

The Islanders earned a power play with 5:34 left in the first and couldn’t capitalize despite a great scoring chance by team captain Anders Lee.

Philadelphia managed to take a 1-0 lead at 18:42 of the first when Farabee fired a wrist shot over Sorokin’s blocker.

The Islanders tied the game just 38 seconds into the second when Leddy scored on the power play, snapping a 42-game streak without a goal in the regular season.

Farabee’s second goal at 2:19, another wrister, quickly pushed the Flyers back ahead 2-1.

Philadelphia took a 3-1 advantage at 15:52 of the second when Farabee deflected Phil Myers’ wrist shot past Sorokin for his hat trick. The 20-year-old Farabee became the first Flyer to record a hat trick before his 21st birthday since Mike Richards in 2006.

New York closed within 3-2 at 1:03 of the third when Bailey redirected a shot in front of Elliott. Barzal then tied the game at 6:27. The two goals were scored on a three-shot span.