RECAP: No. 5 Creighton escapes in win over No. 12 UC Santa Barbara 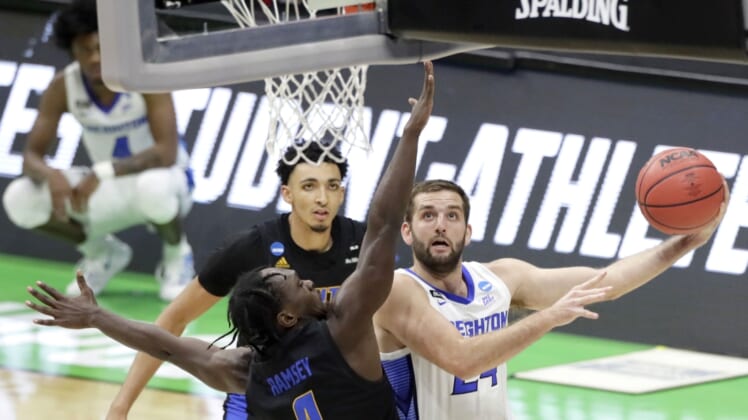 Creighton Bluejays guard Mitch Ballock (24) goes up for a shot while being guarded by UC Santa Barbara Gauchos guard Devearl Ramsey (4) during the first round of the 2021 NCAA Tournament on Saturday, March 20, 2021, at Lucas Oil Stadium in Indianapolis, Ind. Mandatory Credit: Barbara Perenic/IndyStar via USA TODAY Sports

Marcus Zegarowski recorded 17 points and eight assists Saturday as fifth-seeded Creighton withstood an upset bid and nipped UC Santa Barbara 63-62 on Saturday in the first round of the NCAA Tournament at Indianapolis.

Christian Bishop, a 57 percent free throw shooter, made two foul shots with 16 seconds remaining to put the Bluejays ahead by one.

UC Santa Barbara’s Amadou Sow had a chance to give the 12th-seeded Gauchos the lead in the final seconds but missed a shot near the rim and then committed his fifth foul with 1.9 seconds remaining.

The victory was the first in the NCAA Tournament since 2014 for the Bluejays and the 400th career win for Creighton coach Greg McDermott, who also coached at Iowa State and Northern Iowa.

The Bluejays (21-8) trailed by as many as eight and were down 58-52 inside the five-minute mark before going on a 9-0 tear by making four straight shots.

The last, a bucket by Zegarowski, provided a 61-58 margin but Sow connected with 1:15 remaining and added two free throws with 37 seconds left to give UCSB a 62-61 margin.

JaQuori McLaughlin recorded 13 points, seven assists and six rebounds for the Gauchos (22-5), who made their first NCAA appearance in 10 years as Big West champions. The defeat was just their second in 20 games while looking for their first NCAA win since 1990.

Zegarowski scored eight of the Bluejays’ final 10 points of the first half, including two treys, as Creighton posted a 34-30 halftime lead after trailing by eight.

The Gauchos led for almost 16 minutes of the half before a 13-4 closing run Creighton triggered with its defense. Bishop and Denzel Mahoney scored nine and eight first-half points, respectively.

McLaughlin, the Big West player of the year, attempted just two first-half shots but made both and scored seven points to share team-high for UCSB with Norris. After a 9-for-12 start, the Gauchos made just two of their last 12 attempts and had 10 empty possessions in 11 trips to let Creighton rally.