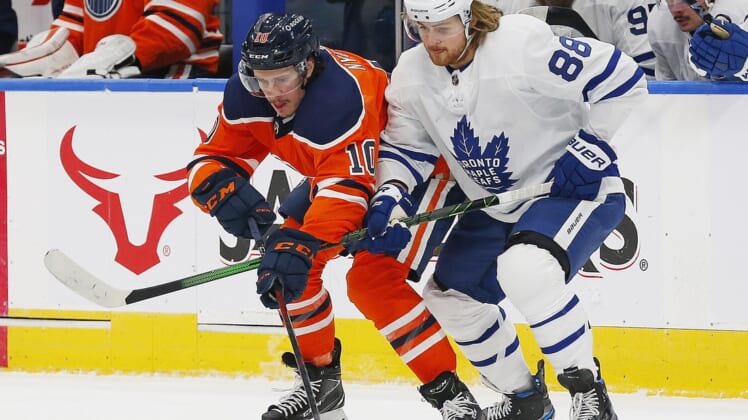 Jimmy Vesey scored twice and goaltender Frederik Andersen made 26 saves in his return after missing four games to lead the visiting Toronto Maple Leafs to a 6-1 victory over the Edmonton Oilers — their third straight road win in the clash of North Division heavyweights.

Zach Hyman and John Tavares both netted one goal and one assist while Jason Spezza collected three assists for the Maple Leafs, who beat the Oilers by a combined score of 13-1 over the three clashes and have a firm hold on top spot in the all-Canadian division. Toronto, which has won four straight games, has posted a 15-2-2 mark since losing to the Oilers at home on Jan. 20.

The Oilers went into the trio of games having won 11 of 13 but were overmatched in all three affairs. Captain Connor McDavid, who leads the league in points, was held off the scoresheet for a third straight game for only the third time in his career.

Vesey opened the scoring at the 9:03 mark. While the Maple Leafs were controlling play in the offensive zone, Vesey went straight to the net after a line change, gained the puck at the bottom of the right circle and found the mark for his first goal in 18 games.

Vesey doubled the lead at 2:57 of the second period by taking advantage of a bad Oilers line change. Vesey finished an odd-man rush by redirecting a Spezza pass for his fourth goal of the season.

Tavares’ power-play goal 107 seconds later made it a 3-0 count for the visitors. Tavares, who won the face-off in Edmonton territory, took a short pass from Joe Thornton while in the slot and made no mistake.

Ilya Mikheyev continued the onslaught when he pounced on a loose puck at 7:02 of the second period before Ryan Nugent-Hopkins finally put the Oilers on the board. The goal snapped the Edmonton’s goal-scoring drought at 153 minutes and 46 seconds.

However, William Nylander restored Toronto’s four-goal edge by netting his fifth goal in four games with 98 seconds remaining in the second period.

Hyman added a power-play goal just past the midway point of the third period — which gives him a three-game goal streak — to round out the scoring.

The good news didn’t end there for Toronto. Auston Matthews returned to the lineup after missing the last two games. He was held without a point, but his team fared just fine.