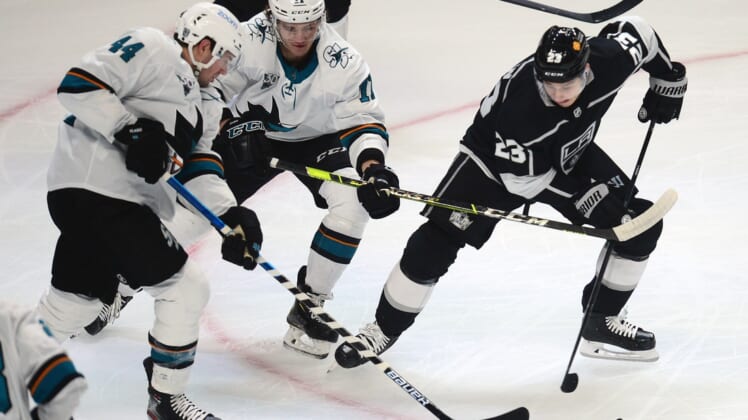 Anze Kopitar, Carl Grundstrom and Jaret Anderson-Dolan each had a goal and an assist for the Los Angeles Kings in a 6-2 win against the visiting San Jose Sharks on Thursday night.

Drew Doughty had three assists, and Cal Petersen made 29 saves for the Kings, who were 0-4-1 in their previous five games.

Tomas Hertl scored two goals, and Martin Jones made 20 saves for the Sharks, who were playing the last of 12 straight road games to start their season.

The Sharks, who rallied in the third period on Tuesday against the Kings before winning in a shootout, cut the lead to 3-2 on the second goal by Hertl at 17:49 of the second period.

The Kings responded with three straight goals in the first seven minutes of the third, however.

Anderson-Dolan scored on a one-timer off a feed from Trevor Moore at 4:51 to re-establish a two-goal lead at 4-2.

Just as Alex Iafallo was scoring on a power play at 5:58 to make it 5-2, a high sticking penalty was called on San Jose defenseman Brent Burns, who had knocked Kings forward Dustin Brown into Jones.

The Sharks requested a video review for goalie interference on Brown, but the goal was upheld, giving the Sharks a delay of game penalty on top of the high sticking penalty.

Jeff Carter scored during the ensuing two-man advantage to stretch the lead to 6-2 at 6:56.

Alexei Melnichuk replaced Jones after the sixth goal and made five saves in his NHL debut.

The Kings also scored three straight goals in the first period before taking a 3-1 lead into the second.

Burns was in the penalty box for hooking when Kopitar scored on a wrist shot from the left face-off dot for a 1-0 lead at 2:47.

Grundstrom made it 2-0 with a deflection from the top of the crease at 9:25.

Austin Wagner scored on a breakaway coming out of the penalty box to extend the lead to 3-0 at 12:42.

Hertl trimmed the lead to 3-1 when he recovered his blocked shot and scored from a sharp angle at 16:25.