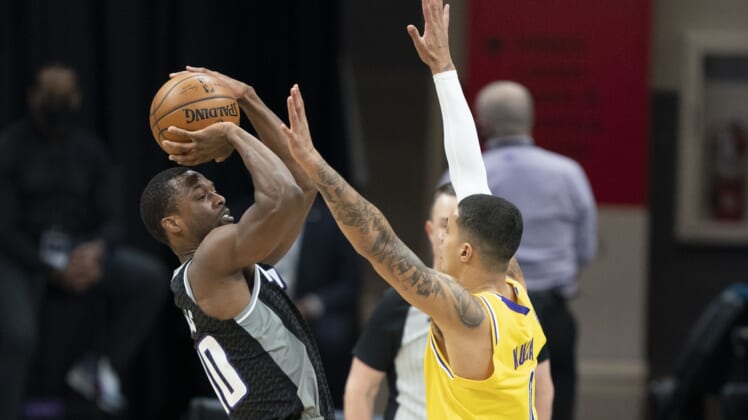 Harrison Barnes scored the decisive basket with 30.1 seconds left to help the Sacramento Kings wrap up a 123-120 victory over the visiting Los Angeles Lakers on Wednesday night.

Buddy Hield registered 29 points, six rebounds and six assists as Sacramento won for just the second time in the past 12 games. De’Aaron Fox had 23 points and eight assists before fouling out, Barnes scored 20 points and Richaun Holmes added 16 points and nine rebounds.

Dennis Schroder had season highs of 28 points and nine assists as Los Angeles played without LeBron James for the first time this season. Montrezl Harrell matched his season high of 26 points and collected 12 rebounds, while Kyle Kuzma scored a season-best 25 points and grabbed 13 rebounds.

The Lakers have dropped seven of their last 10 games and are just 3-6 since Anthony Davis (Achilles, calf) was sidelined.

James wasn’t with the team and was listed him as out with a left ankle injury. Marc Gasol (health and safety protocols) missed his second straight game.

Marvin Bagley III added 14 points and Cory Joseph had 13 for Sacramento, which made 60 percent of its field-goal attempts and was 12 of 25 from 3-point range. Hield was 11 of 15 from the field, including 7 of 11 from distance.

Markieff Morris and Alfonzo McKinnie scored 11 points apiece and Kentavious Caldwell-Pope had 10 for Los Angeles. The Lakers connected on 52.7 percent of their shots, including 12 of 27 from behind the arc.

Fox drove for a hoop to give the Kings a 119-118 lead with 50.2 seconds left. Fox fouled out with 42.6 seconds left, and Schroder hit both free throws to give Los Angeles a one-point lead.

Barnes drove for a basket to give Sacramento a 121-120 lead before Schroder missed a short shot with 5.9 seconds left and Harrell missed the follow.

Barnes made two free throws with 1.3 seconds left to make a three-point margin.

Kuzma’s 3-point attempt grazed the front of the rim as time expired.

Sacramento trailed by as many as 14 in the first quarter before recovering to hold a 63-61 halftime lead.