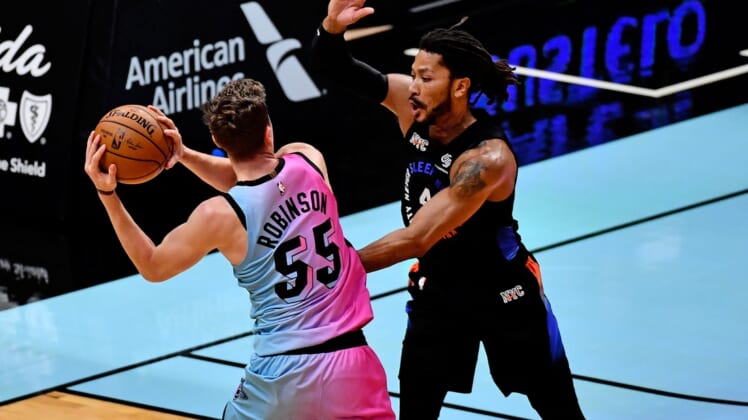 Jimmy Butler finished with 26 points, 10 assists and eight rebounds to lead the Miami Heat to a 98-96 comeback victory over the New York Knicks on Tuesday night.

For the second consecutive game against the Knicks, Butler delivered a clutch performance, as he contested RJ Barrett’s unsuccessful layup attempt as time expired to seal the outcome.

Butler went 13-for-15 at the foul line, hitting one of two free throws after he drew a foul with 4.8 seconds to go. The foul occurred after he dived to the floor to come up with a loose ball off a Julius Randle missed jumper.

The Heat won their third consecutive game despite being outplayed near the rim for most of the game by the Knicks’ frontcourt.

New York outscored Miami 36-14 in the paint and outrebounded the Heat 46-38. The Knicks led by 12 points in the second quarter and by eight points early in the fourth quarter but couldn’t hold on.

Miami’s Bam Adebayo overcame a slow start and finished with 19 points and six rebounds. He shot 13-for-16 from the free throw line, which made up for his 3-for-9 performance from the field.

Heat forward Kelly Olynyk scored 17 of his 20 points in the first half, and Tyler Herro finished with 15 points and seven rebounds. Herro tied the game at 88 with a jumper with 5:02 left in the fourth quarter and gave the Heat a 97-94 lead on a 3-pointer with 1:04 to go. Before that, Butler and Adebayo had accounted for the Heat’s first 29 points of the second half.

Elfrid Payton led the Knicks with 18 points while Barrett finished with 13 points, Randle had 12 and Alec Burks scored 11.

Derrick Rose began his second stint with the Knicks on Tuesday and had 14 points and three assists. Rose first entered the game with 3:27 left in the first quarter, and he keyed a 15-0 run that gave the Knicks a 42-30 lead in the second.

The Heat, despite the shooting struggles of Duncan Robinson, who went 0-for-7 from the field and 0-for-5 from 3-point range, made 14 of 33 long-distance attempts as a team.