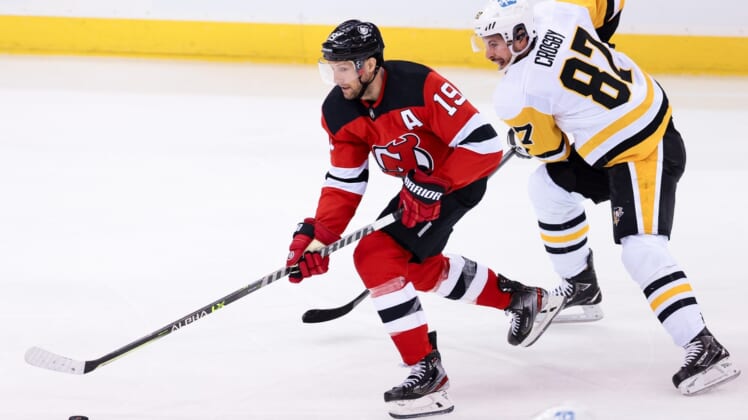 Jack Hughes had a goal and an assist as the New Jersey Devils built a three-goal lead Thursday en route to a 3-2 win over the visiting Pittsburgh Penguins in Newark, N.J.

It was the first of three consecutive games between the teams, with the first two in New Jersey.

P.K. Subban and Travis Zajac also scored for New Jersey, which has won two games in row following four straight losses (0-2-2) and a stretch of nine losses in 10 games (1-7-2).

Devils goaltender Scott Wedgewood, who was a late addition, made 40 saves, which tied his season high. He started after Mackenzie Blackwood participated in the warmups but then did not dress for the game. There was no update on Blackwood’s status, other than the Devils saying the absence was not COVID-19 related.

Jake Guentzel and Bryan Rust scored, Kris Letang added two assists and Tristan Jarry made 32 saves for the Penguins, who lost their second in a row following a six-game winning streak.

Devils winger Nathan Bastian limped off early in the second period and did not return.

The Penguins played without No. 2 center Evgeni Malkin, who left his team’s previous game with an unspecified injury and was put on injured reserve Thursday.

Hughes gave New Jersey a 1-0 lead at 10:02 of the first. He moved into the lower left circle and roofed a sharp-angle shot that banked in off the back of Jarry’s head.

On a Devils power play, Subban rocketed a one-timer from the center point to boost the lead to 2-0 at 8:42 of the second.

New Jersey went up 3-0 just 1:37 later. Damon Severson let loose a shot from the right point that didn’t have a lot of mustard on it, but it went in off Zajac.

Pittsburgh cut it to 3-1 with 12.5 seconds left in the second while on a power play. Guentzel, with his back to the net, redirected a shot by Letang under Wedgewood’s pads.

Rust made it 3-2 with a shot over Wedgewood’s glove with 4.5 seconds remaining in regulation, but it proved too late for a comeback.