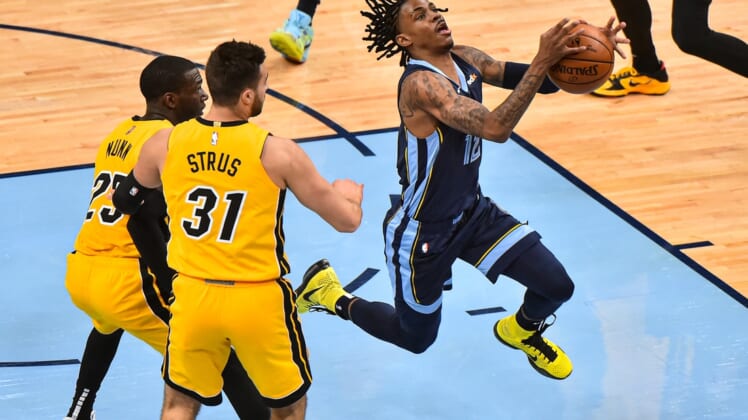 Ja Morant scored on a driving, lefty layup with 1.2 seconds left as the host Memphis Grizzlies defeated the Miami Heat 89-85 on Wednesday night to snap a three-game losing streak.

Morant, who scored a team-high-tying 13 points, beat five-time All-Star Jimmy Butler on the layup, dribbling the length of the court to snap an 85-85 tie.

Miami’s Bam Adebayo then turned the ball over on a risky pass underneath, and Kyle Anderson sank two game-clinching free throws.

Anderson and De’Anthony Melton also had 13 points for the Grizzlies, and Dillon Brooks scored 10. Jonas Valanciunas had 12 rebounds and seven points. Melton, a 6-foot-2 reserve guard, added a career-high 10 rebounds and a season-high-tying six assists.

Butler put up a game-high 24 points. Adebayo had 15 points, 12 rebounds and six assists in just his second game back from a knee injury.

Justise Winslow, Miami’s first-round pick in 2015, played his first game against the Heat since they traded him to Memphis on Feb. 6, 2020. He had five points on 2-for-8 shooting.

The game was a homecoming for Heat rookie Precious Achiuwa, a former University of Memphis star. He had two points and five rebounds in 10 minutes.

There were six lead changes and four tie scores in a first quarter that ended with Memphis on top 25-21.

The Heat didn’t lead in the second quarter until a layup by Max Strus with 34.1 seconds left gave Miami a 47-46 advantage that stood at halftime.

Miami dominated most of the third, but Memphis closed the quarter on a 17-0 run, taking a 72-63 lead into the fourth.

In the fourth, Miami put together a 7-0 run to tie the score at 83. Then, with 29.4 seconds left, Melton grabbed an offensive rebound and was fouled. He made both free throws.

The Heat’s Goran Dragic sank two free throws with 8.9 seconds left to tie the score at 85, and that set the stage for Morant.

For the game, neither team made better than 36 percent of its shots from the floor, but the Grizzlies prevailed with six more free throws and two more 3-pointers.