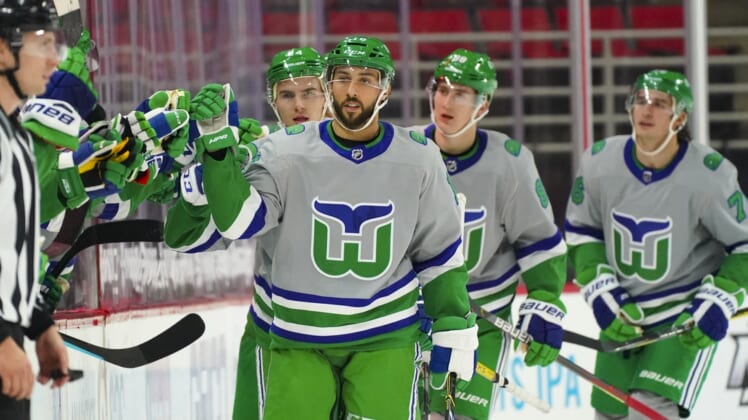 Martin Necas scored the go-ahead goal early in the third period, Nino Niederreiter scored twice, and the Carolina Hurricanes notched a 5-3 win over the visiting Chicago Blackhawks on Friday in Raleigh, N.C.

Vincent Trocheck and Jaccob Slavin also scored for Carolina, which extended its points streak to five games. The Hurricanes beat the Blackhawks for the second time in three meetings this season.

Hurricanes goaltender James Reimer stopped 26 of 29 shots to improve to 8-1-0 on the season.

On the opposite side of the rink, Blackhawks goaltender Kevin Lankinen turned aside 33 of 37 shots but fell to 7-3-3.

The Hurricanes grabbed a 3-2 lead on the power play with 17:34 left in the third period. Necas fired a shot from nearly 60 feet out that Lankinen deflected with his shoulder, but the puck skipped high and ricocheted off Blackhawks defenseman Calvin de Haan and into the net.

Niederreiter made it 4-2 in favor of Carolina when he punched in a loose puck with 4:56 remaining. It was his second goal of the game and his team-leading ninth of the season.

Slavin added an empty-net goal with 3:14 to play.

Chicago pulled within 5-3 with 50.8 seconds remaining when Soderberg redirected a shot by Kane into the back of the net. But the Blackhawks could not get any closer with an extra attacker on the ice.

Carolina opened the scoring with 4:38 remaining in the first period. Niederreiter scored on a wrist shot from the left circle.

The Hurricanes pulled ahead 2-0 with 15:57 to go in the second period. Jake Bean fed a pass toward the low slot for Trocheck, who buried a one-timer for his eighth goal in 14 games.

Chicago cut the deficit to 2-1 on a highlight-reel goal by Kane with 3:21 left in the second period. Kane carried the puck into the offensive zone, where he did a spin move and quickly fired a backhand shot past an unsuspecting Reimer for his eighth goal of the season and the 397th of his career.

Mitchell evened the score at 2-2 with 10.5 seconds remaining in the second period. The Blackhawks’ rookie defenseman ripped a shot through traffic in front of the net for his second goal in 19 career games.