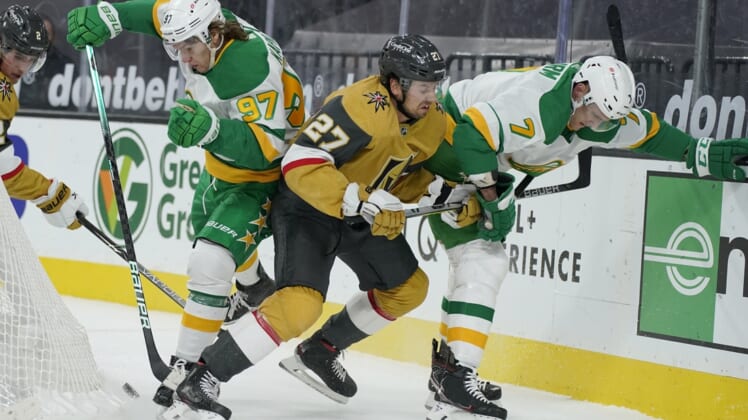 Marc-Andre Fleury made 36 saves, including 20 in the third period, en route to his 11th victory of the season as the Vegas Golden Knights won their fourth straight game, 5-1 over the Minnesota Wild on Wednesday night in Las Vegas.

Mark Stone, Alex Tuch, William Karlsson and Chandler Stephenson each had a goal and an assist and Jonathan Marchessault also scored as Vegas remained one point ahead of the St. Louis Blues in the West Division.

Nicolas Hague added two assists for the Golden Knights, who improved to 10-2-1 at home, tops for home wins in the NHL.

It was the 861st game of Fleury’s career, passing Gump Worsley for 12th place on the NHL’s all-time games played list for goaltenders. Martin Brodeur holds the record (1,266).

Marcus Foligno scored for Minnesota, which had a seven-game point streak snapped. Cam Talbot had 23 saves.

Vegas jumped out to a 1-0 lead at the 2:03 mark of the first period on Tuch’s fifth in the past five games. The goal was set up by Cody Glass’ backhand crossing pass from along the left boards to Tuch coming in alone on the right wing. Tuch then fired a wrist into the top right corner for his ninth goal of the season.

Marchessault made it 2-0 early in the second period with his seventh goal of the season, converting Tuch’s crossing pass with a wrist shot over Talbot’s left shoulder from the bottom of the right circle.

Minnesota cut it to 2-1 midway through the period when Foligno redirected Ian Cole’s shot from the point, which then slid behind Fleury into the crease. Foligno tapped it into the net for his seventh goal of the season and sixth in eight games.

Stone, who had five assists in the Golden Knights’ 5-4 overtime win on Monday night, put Vegas back up by two goals with 8:52 to go in the third period with his fifth goal of the season. He finished a two-on-one with Stephenson, sending on a wrist shot from the low slot past Talbot’s blocker side.

Vegas then sealed the win with two goals in the span of 63 seconds. Stephenson got the first at the end of a two-on-one with Max Pacioretty, and Karlsson followed with an empty-netter. Both players recorded their sixth goal of the season.