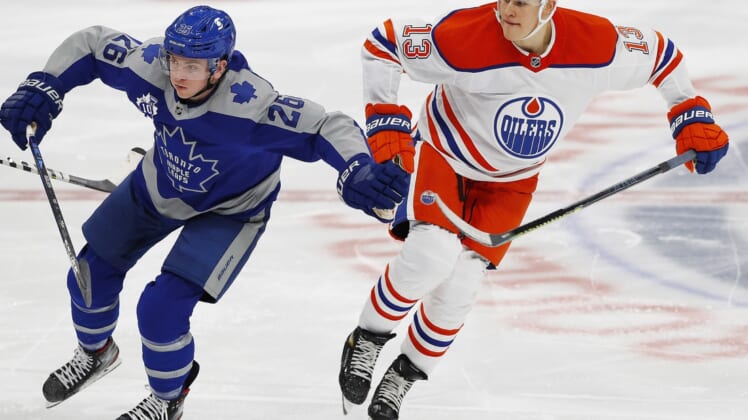 Connor McDavid tipped in a pass 42 seconds into overtime for his second goal of the game and the Edmonton Oilers defeated the visiting Toronto Maple Leafs 4-3 on Saturday night.

The teams split a two-game set. Toronto won 4-3 on Thursday.

The Maple Leafs had won their four previous games and the Oilers had lost two in a row.

McDavid, who has seven goals on the season, also had his 10th assist in the game.

Dominik Kahun and Josh Archibald added a goal each for Edmonton. Leon Draisaitl had two assists, including the pass to McDavid for the game-winner.

Mikko Koskinen stopped 26 shots for Edmonton. He made a key save on Nylander early in overtime.

Frederik Andersen made 27 saves for Toronto. Andersen made his best stop of the game on Archibald with 10 seconds to play in the third period.

The Oilers led 2-1 after the first period.

Edmonton’s Tyler Ennis missed the net on a penalty shot at 3:38 of the first. The shot was awarded because Toronto defenseman Mikko Lehtonen put his hand on the puck that was on the goal line.

Kahun scored for Edmonton at 11:28 on his second attempt after his first was blocked following a pass from Draisaitl on the right wing.

Nylander tied the game at 17:46 from the low slot after Tavares won a battle for the puck and knocked it forward.

Archibald scored from the right side of the crease at 19:46 on McDavid’s pass from behind the goal.

McDavid scored a power-play goal at 6:13 on a solo rush from the Edmonton zone, splitting the defense and flipping the puck past Andersen. Nylander was off for interference.

Matthews scored at 8:08 on a severe angle after working a give-and-go with Mitchell Marner.

Hyman tied it at 9:16 on a power play, tucking home the loose puck after Tavares redirected a shot from Lehtonen, who earned his first NHL point. Draisaitl was off for cross checking.