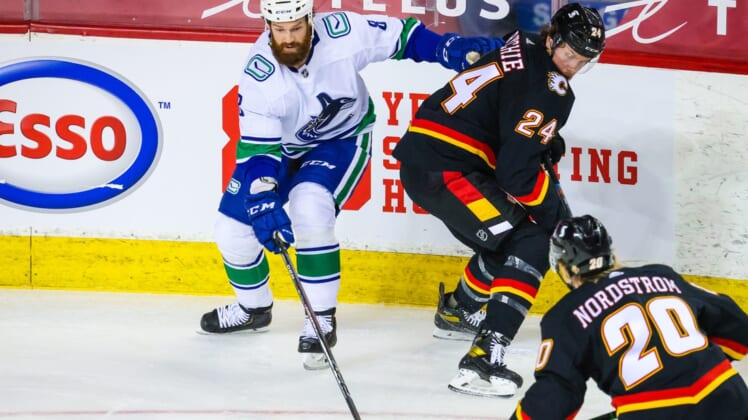 Brock Boeser scored once and added two assists to lead the visiting Vancouver Canucks to a convincing 5-1 victory over the Calgary Flames on Wednesday night.

Bo Horvat and J.T. Miller each collected one goal and one assist for the Canucks, who received a 35-save performance from Braden Holtby to claim the finale of a four-game set between the clubs. Both teams won twice.

With a 1-6-1 record in their past eight games before Wednesday, the Canucks received the quick start they were looking for when Benn opened the scoring 106 seconds into the game. After a Dominik Simon neutral-zone turnover created an odd-man rush, Benn one-timed a cross-ice pass from Horvat for his first goal of the season.

Horvat doubled the lead before the midway point. Quinn Hughes sent a long pass that Horvat couldn’t corral fully, which caused Flames goalie Jacob Markstrom to lunge for a potential pokecheck. Horvat gained possession in time to elude the sprawling goalie and tuck home the puck at 7:37 of the second period.

Mangiapane’s nifty tally — he zipped around Hughes, deked Holtby and slipped the puck past the goalie’s outstretch leg — gave the hosts a much-needed boost with 1:47 remaining in the second period. However, the Canucks pulled away with quick pair of goals before the second intermission.

Miller restored Vancouver’s two-goal lead 15 seconds later when he took a pass from Elias Pettersson and ripped a shot off the crossbar and into the net. Then, 37 seconds after that, Schmidt made it a 4-1 affair by finishing a flurry of action in the Calgary zone.

The offense didn’t end there. During a four-on-one rush seconds after the Flames came within an inch of scoring, Boeser made it a 5-1 game by electing to shoot and zipping a top-corner effort for his team-high 12th goal of the season at 5:54 of the third period.

That spelled the end of the night for Markstrom, who stopped 24 shots despite his team’s horrid defensive play. David Rittich took over in net and saved all four shots he faced.