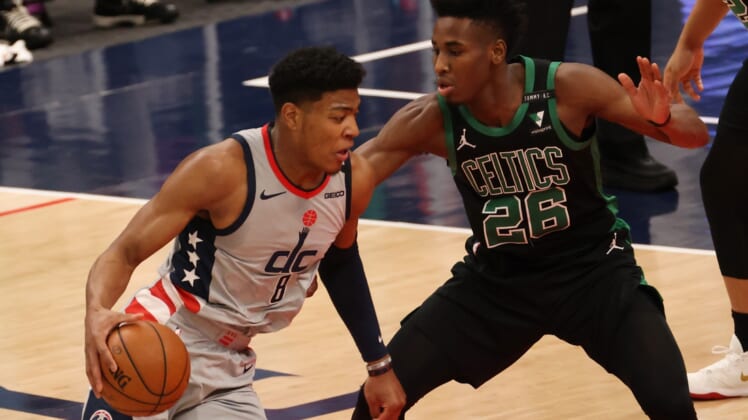 Bradley Beal poured in a game-high 35 points and the Washington Wizards held Jayson Tatum to a season-low six points Sunday afternoon in a 104-91 drubbing of the visiting Boston Celtics.

Russell Westbrook chipped in with 13 points and a game-high 11 assists, missing a triple-double by one rebound, as the Wizards ended a two-game losing streak that had opened a five-game homestand.

Kemba Walker and Jaylen Brown recorded 25 points apiece for the Celtics, who lost for the fourth time in their past five games.

Tatum shot just 3-for-14 overall and 0-for-2 on 3-pointers in 23 minutes en route to his lowest point total since having five in the bubble opener against Milwaukee last July 31.

He had scored in double figures in all 20 previous games this season. His previous season-low had been 16 against Memphis on Dec. 30.

The Wizards led for the final 44 minutes, including by as many as seven in the first quarter and 12 in the second.

It was a 13-point game before four consecutive dunks — three by Rui Hachimura, the other as part of a Westbrook three-point play — and a pair of Moritz Wagner free throws provided all the scoring in a 11-0 burst that put the Wizards in command at 77-53 midway through the third period.

Beal, who had rested during Friday’s home loss to New York after scoring 24 Wednesday against Toronto, hit the 35-point mark for the eighth time this season. The league’s leading scorer made 10 of his 18 shots, four of his nine 3-pointers and all 11 of his free throws.

The Wizards outscored the Celtics 31-18 at the foul line.

Hachimura finished with 15 points, Wagner 11 and Robin Lopez 10 for the Wizards, who were beaten 116-107 at Boston on Jan. 8. Rookie Deni Avdija grabbed a game-high 10 rebounds to go with eight points.

Tatum and Tristan Thompson shared team-high rebound honors with eight for the Celtics, who were coming off a 108-102 home loss to Detroit on Friday.

Only two Celtics scored more than six points, as Walker and Brown combined for more than half the 91-point total.