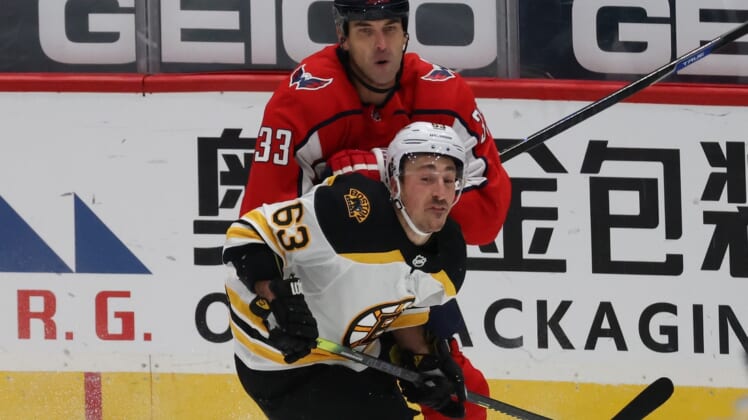 Alex Ovechkin scored 28 seconds into overtime in his return as the Washington Capitals extended their season-opening point streak to a franchise-record nine games with a 4-3 victory against the visiting Boston Bruins on Saturday.

Ovechkin gathered the puck in his own end of the ice, skated over the Boston blue line and fired a wrist shot from the top of the faceoff circles that beat Bruins goaltender Tuukka Rask. It was the 708th goal of Ovechkin’s NHL career, tying him with Mike Gartner for seventh place on the league’s all-time list.

Ovechkin missed the past four games due to COVID-19 protocols.

Nicklas Backstrom had a goal and two assists and Trevor van Riemsdyk and Richard Panik also scored for the Capitals. Goalie Vitek Vanecek made 40 saves.

Charlie McAvoy had a goal and an assist for Boston, including the tying score with 58 seconds left in regulation as the Bruins rallied from a 3-0 deficit. Nick Ritchie and Brad Marchand also scored for the Bruins and Patrice Bergeron had three assists. Rask stopped 19 of 23 shots.

There were plenty of storylines:

Though Ovechkin returned, Capitals forward Evgeny Kuznetsov, defenseman Dmitry Orlov and goaltender Ilya Samsonov remained out for the fifth straight game due to the virus.

Boston’s David Pastrnak, who shared the league’s goal-scoring lead last season with Ovechkin with 48, made his 2021 debut after offseason hip surgery.

And perhaps the biggest one was 6-foot-9 Capitals defenseman Zdeno Chara facing Boston for the first time after serving the previous 14 seasons as the Bruins’ captain.

Backstrom opened the scoring at 18:06 of the first on a wrist shot from the top of the faceoff circles.

The Capitals made it 2-0 at 5:22 of the second on van Riemsdyk’s shot from the right point.

Washington extended the lead on Panik’s power-play goal at 10:03 of the second on a slap shot from between the top of the faceoff circles.

Ritchie sparked the Bruins’ comeback with a power-play goal at 17:32 of the second, tipping David Krejci’s shot from the blue line past Vanecek.

Boston pulled within a goal at 6:03 of the third as Marchand scored from the top of the crease.

McAvoy tied the score with an extra attacker on the ice at 19:02 of the third following a wild scramble in front of the Washington net.