RECAP: Alabama rolls into Sweet 16 with win over Maryland 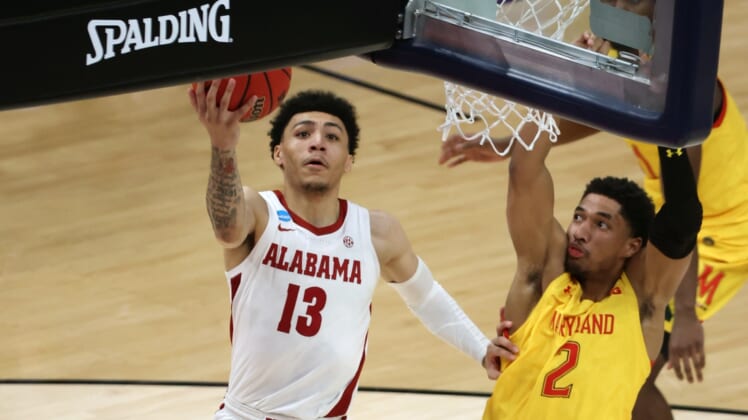 Jahvon Quinerly dished out a career-high 11 assists — many of them leading to a barrage of 3-pointers — powering the second-seeded Alabama Crimson Tide to a 96-77 win over the 10th-seeded Maryland Terrapins in a East Region second-round NCAA Tournament game in Indianapolis.

Quinerly added 14 points for a double-double off the bench.

Alabama entered the game leading the nation in 3-pointers (325) and made 16-of-33 from long range to break the program’s previous single-season record of 334 3-pointers, which was set last year.

Alabama, which is on a 20-3 run in its past 23 games, was so dominant that it didn’t need much from Herbert Jones, the SEC’s Player of the Year and Defensive Player of the Year. Jones scored six points and grabbed six rebounds.

The teams’ shooting percentage were nearly identical in the first half — Alabama 51.5 percent and Maryland 50. But the Tide, who were plus-10 on rebounds, had a 12-2 edge on second-chance points and a 24-7 advantage on bench points.

Alabama started the second half on a 19-4 run, and the game was virtually over at that point.

For the game, Alabama won the rebound battle, 40-19, and shot 53 percent from the floor.

Maryland lost big despite shooting 53.3 percent from the floor, including 10-for-27 on 3-pointers (37 percent).