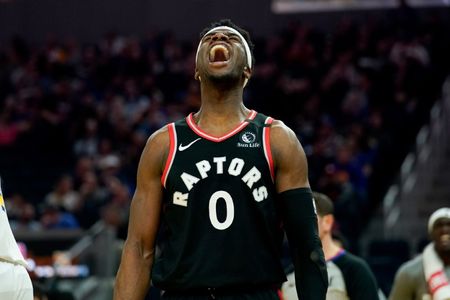 He allegedly assaulted a woman at a luxury apartment hotel in Midtown Manhattan. USA Today said the 20-year-old woman told authorities she was Davis’ girlfriend. He is alleged to have hit her in the face, causing pain to her eye, and breaking the screen of her phone.

ESPN cited the criminal complaint as alleging the woman’s son, who was said to be standing nearby when Davis struck her, also fell down in the incident.

According to a criminal complaint, the woman’s son was standing next to her when Davis hit her, causing the son to fall.

He was released after being arraigned Wednesday in New York on multiple charges, according to authorities.

“We are aware of the reports, and are seeking more information,” the Raptors said in a statement.

The Raptors signed Davis, 23, as a free agent after he wasn’t drafted in 2019. He played four seasons at Ole Miss.

He made an impact for the Raptors during the 2019-20 season and was named to the NBA All-Rookie Second Team.

He was fifth among rookies in 3-point percentage (38.8 percent).