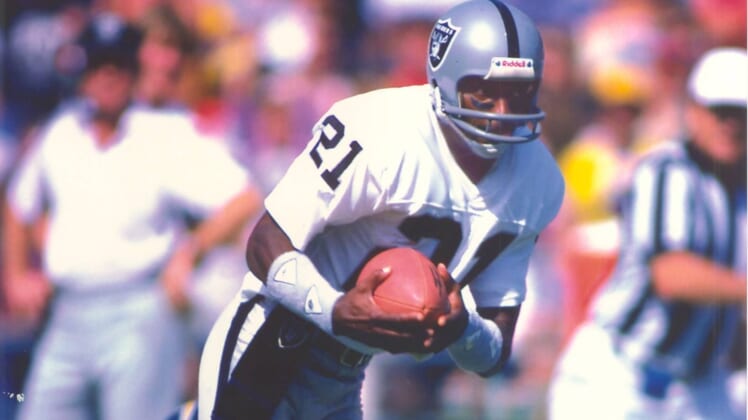 SPECIAL: Here’s an excerpt from our in-studio interview from 2018 with Branch. He talks about his Hall of Fame snub and how his coach Tom Flores should also:

Just two days after the vibrant and energetic Cliff Branch celebrated his 71st birthday, the Raiders legend died of natural causes in a hotel room in Bullhead City, Arizona.

“Cliff Branch touched the lives of generations of Raiders fans. His loss leaves an eternal void for the Raiders Family, but his kindness and loving nature will be fondly remembered forever,” the team said in a statement Saturday night. “Cliff’s on-field accomplishments are well documented and undeniably Hall of Fame worthy, but his friendship and smile are what the Raider Nation will always cherish.”

Raiders owner Mark Davis, through the team’s official Twitter account, said: “Cliff was my best friend. I will miss him dearly.”

When contacted Sunday morning, the Bullhead City Police Department told us there was no suspected foul play and that Branch “most likely died from natural causes.” The spokesperson would not release any other details at this time.

Branch, who has all of the requisite numbers and career resume to be a member of the Pro Football Hall of Fame, has been denied that honor and now will not live to see one of the biggest injustices rectified.

For Raiders fans, his passing and snub are all too familiar. When former Raiders great, and eventual HOF member, Ken Stabler died in 2015, the Hall failed to honor one of the game’s best before his passing. Sadly, his honor came posthumously as well.

Branch played for the Raiders from 1972-85 winning three Super Bowls with the Silver and Black. The four-time Pro Bowler was an integral part of the Raiders dynasty of the 70s-80s.

Still active with the Raiders organization, Branch was a tireless ambassador for the team in the Bay Area and the team’s future home of Las Vegas.

From the entire staff at Silver and Black Today, our thoughts and prayers are with the Branch family and the Raiders organization.