Rafael Nadal rallies from set down to advance in Barcelona 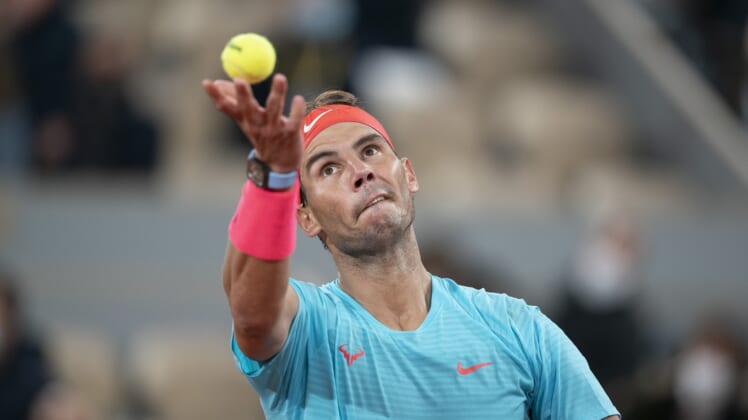 Top seed Rafael Nadal rallied from a set back to beat Ilya Ivashka of Belarus 3-6, 6-2, 6-4 on Wednesday in the second round at the Barcelona Open in Spain.

Nadal lost serve in the opening game of the match and wasn’t able to break Ivashka’s serve throughout the first set. He won just 70.6 percent of points on his first serve, was broken twice and had two double faults in an uncharacteristically poor showing on service in the opening set.

By the second set, he had righted his serve, winning 86.7 percent of points on his first serve in the second set and 83.3 percent in the third. He didn’t face a break point in either set.

In other action, No. 2 seed Stefanos Tsitsipas of Greece, No. 3 Andrey Rublev of Russia, No. 4 Diego Schwartzman of Argentina, No. 6 Pablo Carreno Busta of Spain and No. 10 Felix Auger-Aliassime of Canada were among those advancing.

No. 9 Fabio Fognini of Italy defaulted for verbal abuse. He was losing 6-0, 4-4 to Zapata Miralles of Spain when the line judge reported him for swearing after a foot fault. He had been warned earlier in the match

Djokovic capitalized on five of his eight service break opportunities in the win. In the next round, he’ll meet fellow Serb Miomir Kecmanovic, the eighth seed, who needed three sets to oust Arthur Rinderknech of France 6-3, 3-6, 6-3.