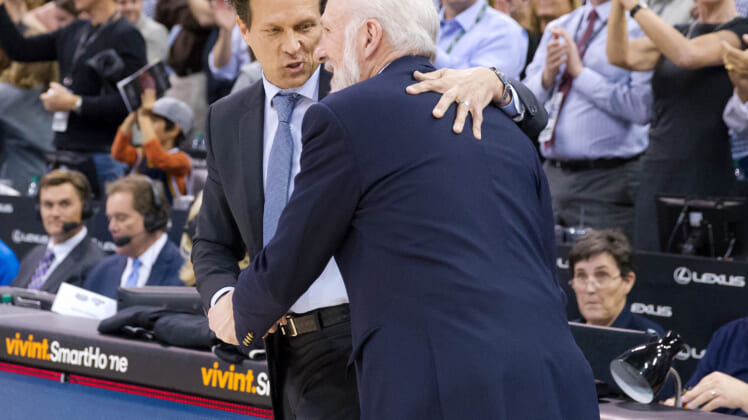 San Antonio Spurs head coach Gregg Popovich is nearing the end of his legendary career. When he halks away, Utah Jazz coach Quin Snyder could potentially be poised to take over in San Antonio.

Popovich, hired by the Spurs in 1996, has taken a year-to-year approach to his future. However, retirement is inevitable and many around the NBA are wondering how much longer it will be until the 73-year-old steps away from the grind of coaching.

The winningest coach in NBA history might not step away from the game entirely. Instead, he could move into a front-office role to decrease his workload and remains a part of San Antonio’s iconic sports franchise. When he does step away, there might be a candidate targeted to replace him.

According to NBA insider Marc Stein, Quin Snyder is viewed around the league as a potential candidate who could take over in San Antonio after Popovich retires.

Snyder has a brief history with the Spurs’ organization, working for the team as the head coach of the G-League Austin Spurs (2007-’10). He also later served as an assistant on Mike Budenholtzer’s staff with the Atlanta Hawks (2013-’14) and Budenholtzer is part of the Popovich coaching tree.

Snyder’s resume certainly deserves to be on San Antonio’s radar. He earned NBA D-League Coach of the Year in 2009 and boasts a 288-171 record since 2016. Whenever Popovich retires, if he doesn’t recommend an internal hire to replace him, he would likely support Snyder stepping in as the Spurs’ coach.