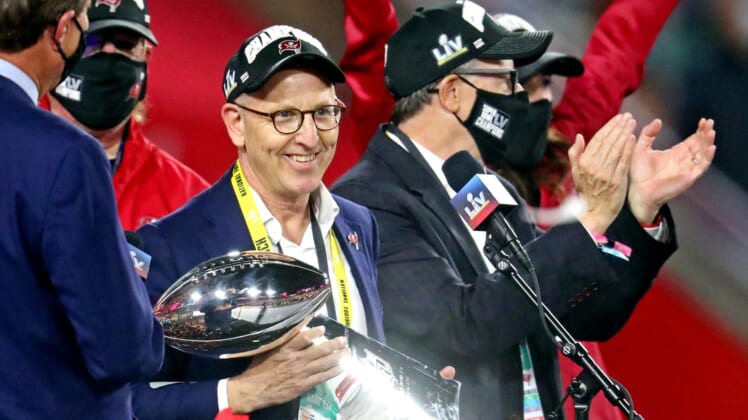 Sunday’s Premier League match between Manchester United and Liverpool was postponed following protests by thousands of Man U fans who invaded the pitch at Old Trafford in a demonstration against the team owners, the Glazer family, owners of the Tampa Bay Buccaneers.

“Too much damage has been done to the stadium and they cannot feasibly keep people out,” said a report by NBCSN, announcing the game’s postponement following what the Premier League called a “security breach.” Additionally, supporters delayed the departure of the team bus from its hotel.

The protests were in response to the club’s recent announcement that it would become one of the 12 “founding members” of the controversial Super League. Man United reversed its decision two days later.

“Following the security breach at Old Trafford, the Manchester United vs. Liverpool game has been postponed,” said the Premier League in a statement. “This is a collective decision from the police, both clubs, the Premier League and local authorities.

“The security and safety of everyone at Old Trafford remains of paramount importance. We understand and respect the strength of feeling but condemn all acts of violence, criminal damage and trespass, especially given the associated COVID-19 breaches. Fans have many channels by which to make their views known, but the actions of a minority seen today have no justification.

“We sympathise with the police and stewards who had to deal with a dangerous situation that should have no place in football. The rearrangement of the fixture will be communicated in due course.”

Manchester United also released a statement, which addressed their fans’ concerns: “Our fans are passionate about Manchester United, and we completely acknowledge the right to free expression and peaceful protest.

“However, we regret the disruption to the team and actions which put other fans, staff, and the police in danger. We thank the police for their support and will assist them in any subsequent investigations.”

Fans have reportedly been disgruntled by the Glazer family’s ownership since they purchased the club in 2005. But discontent has reached new heights following the Super League debacle.

Following their decision to withdraw from the Super League, co-owner Joel Glazer issued an apology in an open letter to Man U fans, stating: “In seeking to create a more stable foundation for the game, we failed to show enough respect for its deep-rooted traditions — promotion, relegation, the pyramid — and for that we are sorry.

“This is the world’s greatest football club, and we apologize unreservedly for the unrest caused during these past few days. It is important for us to put that right.

“Manchester United has a rich heritage and we recognize our responsibility to live up to its great traditions and values.”

The Glazer family did get some positive press during the pandemic for continuing to pay full-time staff and refunding tickets to fans.

Arsenal, owned by Los Angeles Rams owner Stan Kroenke, is also facing a similar situation following its participation in the Super League announcement. On April 23, several hundred fans protested outside Emirates Stadium at Arsenal’s match against Everton calling for Kroenke to leave the club. Several international outlets reported on Saturday that Arsenal had been put up for sale, but reports were not confirmed.