Just 43 seconds into Game 1, James Harden was headed back to the locker room and sent for an MRI on his right hamstring.

After getting over the initial shock of Harden’s injury, the Nets survived the absence of one of their stars and will need to find a way to win without him again when they host the Milwaukee Bucks in Game 2 of the Eastern Conference semifinals on Monday.

The Nets on Sunday ruled Harden out for Game 2 with right hamstring tightness.

They find themselves in a situation they grew accustomed to during a 48-win regular season, when the combination of injuries and rest limited Harden, Kevin Durant and Kyrie Irving to a combined eight games together. 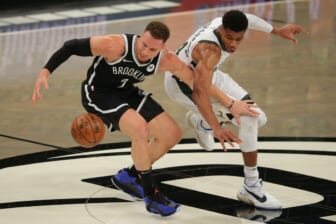 Against the Boston Celtics in the first round, the trio thrived by combining to score 85.2 points per game. But any plans for a big night by the big three against Milwaukee were thwarted when Harden was injured on a drive to the hoop on Brooklyn’s first possession of the series opener.

Without Harden — who missed 18 straight games from April 5 to May 11 with a right hamstring strain and 20 of 21 games after initially suffering hamstring tightness on March 31 — it took a little while for the Nets to find their footing in their 115-107 win.

The Nets took the lead for good early in the second quarter, held a 14-point lead through three quarters and put the game away midway through the fourth.

As Harden was getting his MRI, Durant and Irving were the stars. Durant scored 29 points on 12 of 25 shooting while Irving added 25 and eight assists on 11 of 26 from the floor. Both players also logged heavy minutes as Irving played 44:35 and Durant was on the floor for 40:06.

The worst news for the Bucks was the additional scoring from the Nets beyond their stars.

Milwaukee savaged the Nets for 72 points in the paint but did little outside of it.

Giannis Antetokounmpo scored 34 points on 16 of 24 shooting with most of his baskets coming inside the paint.

It was a similar performance to Game 1 in the first-round against Miami. Milwaukee survived missing 26 of 31 3-point tries to get a two-point overtime win, and Saturday the Bucks were 6 of 30 from 3-point range.

“Obviously in that game, we were able to win that game,” Antetokounmpo said. “But now you’re playing with a team that’s way better offensively, and they made a lot of shots, so we just got to come out Game 2 and do a better job.”

Milwaukee is looking to avoid falling behind 2-0 in a playoff series for the second straight season. Last summer in the NBA bubble, the Bucks lost the first three games to Miami en route to being ousted in five games during the second round.