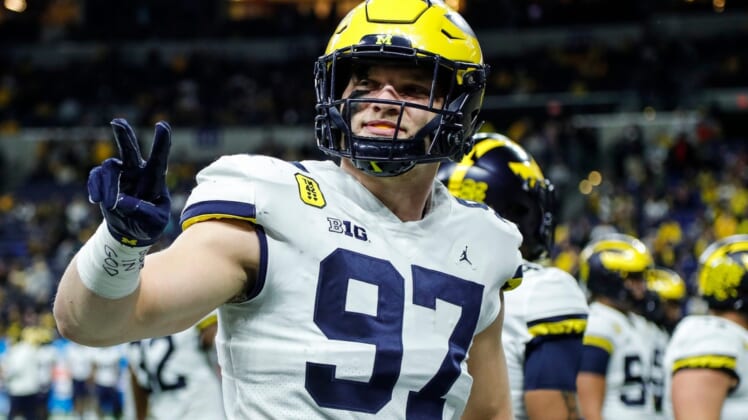 Hutchinson had a huge season for the Wolverines in 2021, tallying 62 tackles (16.5 for loss), 14 sacks, two forced fumbles, one fumble recovery and 12 quarterback hits. He was a consensus All-American, the Big Ten’s defensive player of the year, and winner of the Lombardi Award, Ted Hendricks Award and Lott Impact Trophy.

He finished second in the Heisman Trophy voting.

“My Michigan legacy is complete, and it was truly the best time of my life,” Hutchinson, a product of Plymouth, Mich., posted on Twitter. “Onward and upward to the 2022 NFL Draft. Thank you for everything, Wolverine nation and beyond.”

Hutchinson was a starter from the day he walked onto campus in Ann Arbor. In all, the 6-foot-6, 265-pound Hutchinson played 43 games for the Wolverines, recording 160 tackles, 18.5 sacks, nine passes defensed, four forced fumbles and one fumble recovery.

Pro Football Focus ranks Hutchinson as its No. 1 overall draft prospect, and some of the latest mock drafts project him as the No. 1 or 2 pick.