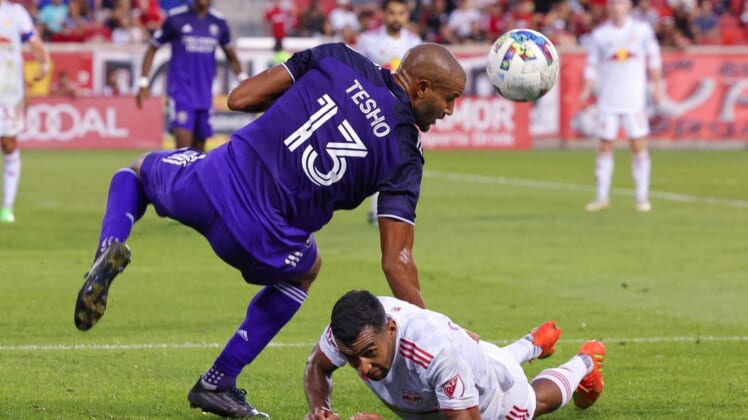 Orlando City SC will be without standout forward Alexandre Pato when they visit Charlotte FC in a crucial Eastern Conference match on Sunday night.

Pato was taken off the field on a stretcher with a serious right knee injury during a 1-0 road win over the New York Red Bulls on Aug. 13. The club said medical exams detected damage to internal structures of Pato’s knee but haven’t yet specifically revealed what type of injury he sustained.

The 32-year-old Brazilian has three goals and six assists in 22 games (14 starts) for Orlando City (9-10-6, 33 points), who were among six teams wrapped up in a two-point logjam entering play on Saturday.

The win over the Red Bulls halted a three-match losing streak and five-match unbeaten stretch (0-3-2) for the Lions.

“There are a lot of expectations at this point in the season with the way the standings are,” Orlando City coach Oscar Pareja told reporters. “… Despite the challenges that we’ve had, we are together and we’re optimistic. Charlotte is a rival that has had ups and downs, as well as many in that pack of teams looking for qualification (to the playoffs).”

Charlotte FC are coming off an impressive 3-1 road victory over New York City FC on Wednesday. It marked just the second road triumph of the season for the expansion squad and also ended a stretch of four losses in five games.

“We are a team with a lot of potential and possibilities,” Charlotte interim coach Christian Lattanzio said. “Still, I want us to improve game-to-game, as well as tactically, in the way that we defend against the kinds of challenges the opposition will bring us.”

When the teams met April 30, Orlando collected a 2-1 home win. Ruan Teixeira and Facundo Torres scored first-half goals for the Lions, while Christian Fuchs tallied on a second-half penalty kick for Charlotte.

Charlotte leading goal scorer Karol Swiderski scored his eighth of the season against NYCFC. Ercan Kara leads Orlando City with seven goals and Torres has added five, including the lone tally in the win over the Red Bulls.

Orlando City goalkeeper Pedro Gallese set a club record with his eighth shutout of the season in the win over the Red Bulls.