Phoenix Suns’ Chris Paul out indefinitely due to COVID-19 protocols 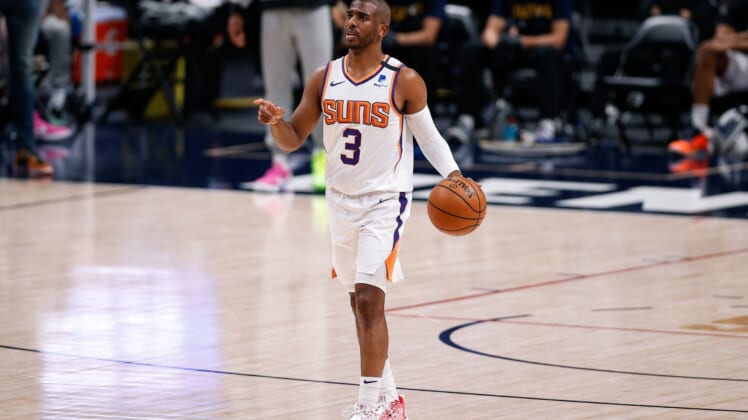 Jun 13, 2021; Denver, Colorado, USA; Phoenix Suns guard Chris Paul (3) dribbles the ball up court in the first quarter against the Denver Nuggets during game four in the second round of the 2021 NBA Playoffs at Ball Arena. Mandatory Credit: Isaiah J. Downing-USA TODAY Sports

Chris Paul just led the Phoenix Suns to the Western Conference Finals, but is in danger of missing time, as he’s entered the NBA’s COVID-19 health and safety protocols.

Shams Charania of The Athletic reported the news of Paul being in COVID-19 protocols on Wednesday.

Paul has already battled through adversity in the NBA playoffs, fighting off a shoulder injury to perform at an extremely high level. In the finale of the Suns’ second-round sweep against the Denver Nuggets, Paul scored 37 points in a 125-118 victory. 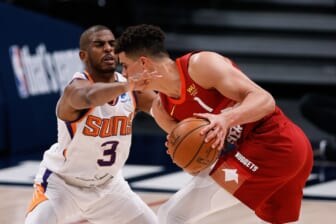 At age 36, Paul is four wins away from his first-ever NBA Finals appearance. Phoenix is awaiting the winner of the Utah Jazz-Los Angeles Clippers series. If that matchup — currently tied at two apiece — goes the full seven games, that’ll help CP3’s bid to come back to the court without missing any time.

If Paul can’t go to begin the Conference Finals, it’ll be up to the Suns’ young star duo of guard Devin Booker and center Deandre Ayton to pick up the slack. Booker has been particularly impressive in the postseason, averaging 27.9 points per contest on 48.7% shooting, highlighted by a 47-point performance to close out the Los Angeles Lakers.

Further updates on Paul’s status are expected in the coming days, but for now, this is a discouraging setback for an upstart Phoenix squad that is riding so much momentum.