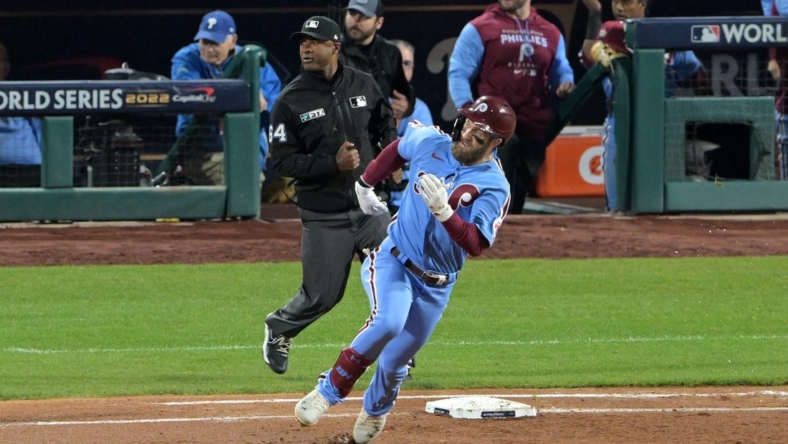 The Philadelphia Phillies star was hampered throughout the 2022 season by damage to the ulnar collateral ligament of his right throwing elbow. Because of the injury, he spent the bulk of the season at the designated hitter position — 90 of 99 games played — instead of in his customary right field.

He also missed two months with a broken left thumb.

Dave Dombrowski, president of baseball operations, said the team won’t know the extent of the elbow injury — and a subsequent timeline for return — until Dr. Neal ElAttrache performs the surgery on Nov. 23. ElAttrache won’t be able to determine whether the ligament can be repaired or if Harper will need Tommy John surgery to reconstruct the ligament until he gets a closer look in surgery, Dombrowski said.

“I would think it will slow him down for the season,” Dombrowski told reporters. “But we’ll know more next week.”

Harper, 30, was unable to throw the ball past mid-April. He hurt his elbow on April 11 as he made a throw to home plate in a game against the New York Mets and soon after converted to the DH role when an MRI showed a strain in the muscles and tendons where the elbow and forearm meet.

Dombrowski said that even if Harper has an extended recovery period, the Phillies won’t need to scramble to replace him.

“Right now, we’re looking at him coming back and DHing at some portion of (the season),” Dombrowski said. “We have other players that can DH.”

Despite the injuries, Harper hit .286 with 18 home runs and 65 RBIs for the Phillies, who lost to the Houston Astros in the World Series in six games. In 17 postseason games, he batted .349 with six homers and 13 RBIs.