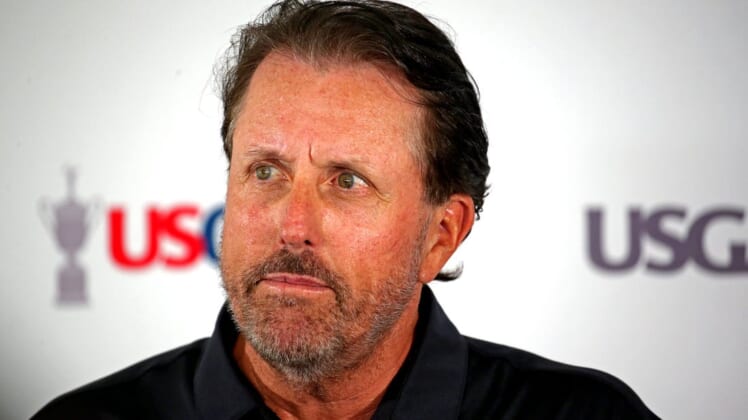 Phil Mickelson said Monday that he has “earned” his lifetime membership to the PGA Tour and remains “hopeful” to once again play events on the circuit from which he is now suspended.

Mickelson made the comments at Brookline, Mass., site of this week’s U.S. Open, the only major Mickelson has not won in his career. The USGA, organizer of the event, ruled last week that Mickelson and the other players who defected to the upstart LIV Golf Invitational Series would still be allowed to play.

It’s a choice Mickelson said he should be afforded on the PGA Tour as well. He has won six majors and 45 PGA Tour events.

“I’m very appreciative of the many memories, opportunities, experiences, friendships and relationships the PGA Tour has provided and those are going to last a lifetime,” said Mickelson, who turns 52 on Friday. “But I’m hopeful that I’ll have a chance to create more.”

Mickelson is coming off a tie for 33rd in this past weekend’s inaugural LIV tournament in London. It was the first tournament Mickelson played in since the Saudi International in February. His last event on the PGA Tour was the Farmers Insurance Open in January.

Mickelson was asked why he decided to join the LIV tour.

“I think that there’s an obvious incredible financial commitment,” said Mickelson, who the Golf Channel reported last week was paid $200 million to join.

He also said he respects the strong opinions of Rory McIlroy and other golfers who have been vocal in their support of the PGA Tour.