PGA commissioner on suspending LIV players: ‘They need us’ 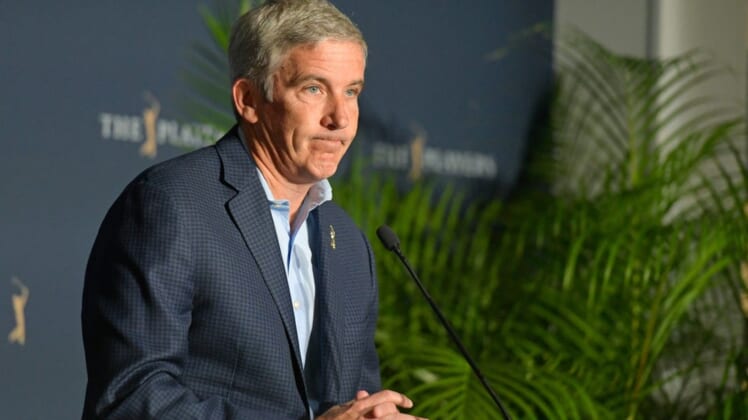 PGA Tour commissioner Jay Monahan called the LIV Golf Invitational Series a string of “exhibition matches against the same players over and over again” in defending his decision to suspend tour members who play in the budding rival circuit.

Seventeen players, some of whom had preemptively resigned from the tour, were suspended for playing this week’s LIV debut event outside London in defiance of the PGA Tour’s decision to deny them competing-event releases.

During CBS’s coverage of the final round of the RBC Canadian Open on Sunday, Monahan gave his first interview since the punishments became official. Monahan backed his decision, saying it was his “job to protect, defend and celebrate our loyal PGA Tour members” and explained why players couldn’t compete on both circuits.

“Why do they need us so badly?” Monahan said. “Because those players have chosen to sign multi-year lucrative contracts to play in a series of exhibition matches against the same players over and over again. You look at that versus what we see here today, and that’s why they need us so badly. You’ve got true, pure competition. The best players in the world are here at the RBC Canadian Open, with millions of fans watching, and in this game, it’s true and pure competition that creates the profile in the presence of the world’s greatest players.

“And that’s why they need us. That’s what we do. But we’re not going to allow players to freeride off of our loyal members, the best players in the world.”

Monahan also addressed the main reason that LIV is controversial — the record purses being stocked by the Saudi Investment Fund in a campaign many feel is an attempt to “sportswash” Saudi Arabia’s human rights record.

“I’ve had a player meeting and I’ve talked to a number of players individually for a long period of time,” Monahan said. “And I think you’d have to be living under a rock to not know that there are significant implications. And I would ask any player that has left or any player that would consider leaving, ‘Have you ever had to apologize for being a member of the PGA Tour?'”

Rory McIlroy, the star from Northern Ireland who won the Canadian Open, also took a chance to get a jab in at LIV. A longtime critic of the rival tour, McIlroy was glad to note that he surpassed LIV CEO Greg Norman’s career mark of 20 tour wins by earning his 21st victory Sunday.

“I had extra motivation of what’s going on across the pond,” McIlroy said. “The guy that’s spearheading that tour has 20 wins on the PGA Tour and I was tied with him and I wanted to get one ahead of him. And I did. So that was really cool for me, just a little sense of pride on that one.”