Penn State to honor Joe Paterno prior to Temple game 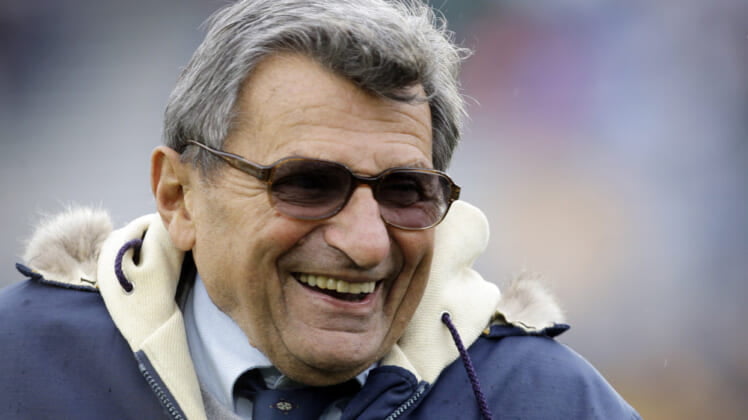 When Penn State’s football team takes the field against Temple on September 17, it will be doing so on the 50th anniversary of Joe Paterno’s first game as head coach of the Nittany Lions. The anniversary will not pass without honoring the late coach.

According to NBC’s Tom Winter, Penn State will have a ceremony to honor Paterno, who was fired in November of 2011 and passed away the following January.

Penn State University to honor fired coach Joe Paterno on the 50th anniversary of his first game as a head coach on September 17th.

Obviously, Paterno’s firing was not a normal one. He was fired for allegedly working to cover up the child abuse crimes of Jerry Sandusky — his former defensive coordinator — who is now in prison.

Naturally, that makes the idea of honoring Paterno’s anniversary feel a bit strange. There is really no parallel to speak of. Other coaches have been fired under less than normal circumstances, but this one is in a ballpark by itself.

Woody Hayes, for example, was fired from Ohio State after punching an opposing player near the end of a game. Eventually, the Buckeyes brought Hayes back and honored him with the “Dotting the I” honors in the Script Ohio ceremony.

There are a few differences. One, Hayes himself was the one who punched the opposing player. Sandusky, not Paterno, was the man convicted of child abuse charges.

On the other hand, Hayes was a 65-year-old man throwing a punch at Charlie Bauman, a fully padded player 54 years his junior. That didn’t make it okay. Bauman did nothing to instigate Hayes.

But at the same time, there was no chance that Hayes was going to inflict any damage to Bauman. As a matter of fact, had Bauman stayed to fight back, it would have worked out even worse for Hayes.

Sandusky obviously did inflict serious and long-lasting damage on his victims. It seems at least possible (if not probable) that Paterno covered this up. In doing so, he not only kept Sandusky from justice, but also put even more kids at risk

While Paterno isn’t here to speak for himself now, we can’t discount what he said about the scandal in one of his final public statements.

“This is a tragedy,” Paterno said, per CBS Pittsburgh. “It is one of the great sorrows of my life. With the benefit of hindsight, I wish I had done more.”

By his own admission, he could have and should have done more to prevent the abuse that was happening.

No, Paterno was fired because credible evidence suggested that he was covering up an abuse scandal that had been happening for years.

While there’s no doubt that Paterno made positive contributions to the university, the negatives are too strong here.

With that in mind, honoring something as trivial as the 50th anniversary of his first football game doesn’t seem appropriate.