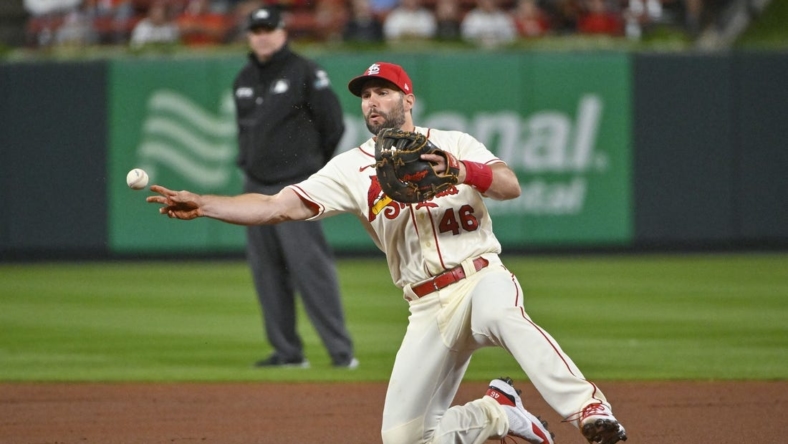 St. Louis Cardinals first baseman Paul Goldschmidt won the National League MVP award for the first time in his career, it was announced Thursday on the MLB Network.

“It’s a great honor. It isn’t just about me,” Goldschmidt said on the MLB Network. “it’s about the teammates that I have and the coaches and guys I played with in the past. I’ve learned a lot from a lot of different players and I think it means a lot to all of those people and I hope they know the effect they’ve had on my career.”

Goldschmidt has been MVP runnerup twice before (2013, 2015) and third another time (2017) during his eight seasons with the Arizona Diamondbacks. But his fourth season with the Cardinals was the breakthrough campaign.

The seven-time All-Star topped 30 homers for the seventh time in his career and the century mark for the fourth time.

“I want to find a way to still be a good or great player and find way to perform,” Goldschmidt said of moving toward the twilight of his career. “And try to win. Just find ways to get better as I get older.”

Machado, 30, batted .298 with 32 homers and 102 RBIs while helping the Padres reach the NL Championship Series. He was the leader for San Diego after the club didn’t have star shortstop Fernando Tatis Jr. for the entire season.

The six-time All-Star recorded his sixth 30-homer campaign and topped 100 RBIs for the third time.

The seven-time All-Star topped 30 homers and 100 RBIs in the same season for the seventh time.