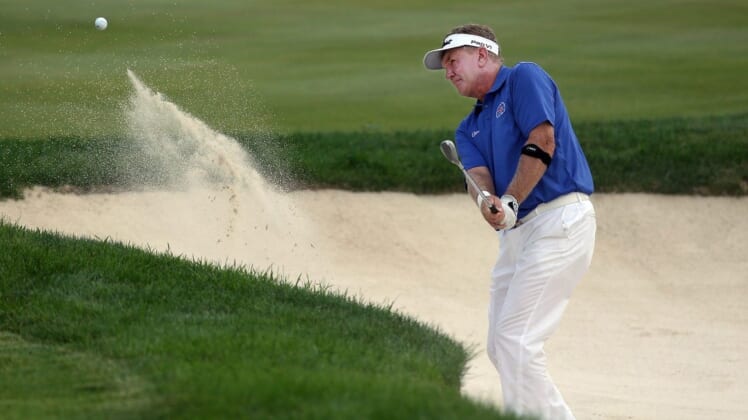 Paul Broadhurst carded a 4-under-par 66 in rough conditions on Saturday to move into a tie entering the final round of The Senior Open Championship at Gleneagles in Auchterarder, Scotland.

Broadhurst collected six birdies against two bogeys to finish the third round at 9-under 201 for the tournament. It is the England native’s lowest 54-hole score in a PGA Tour Champions major.

The 2016 Senior Open champion is joined by Northern Ireland’s Darren Clarke, who registered his lowest 54-hole score in any PGA Tour Champions major despite failing to hold a two-shot lead after two rounds.

Clarke overcame successive bogeys on Nos. 12 and 13 by sinking an 8-foot birdie putt on the last hole.

He is bidding to join Gary Player, Bob Charles and Tom Watson as the lone golfers to win both The Open and Senior Open. Clarke led after 36 holes last year and finished in third place behind winner Stephen Dodd.

“It would be pretty cool to have both of them sitting beside each other,” Clarke said. “I would love to win The Senior Open as well as The Open.

Broadhurst and Clarke hold a one-stroke lead over Jerry Kelly (67) and Australian Steven Alker (66). Kelly is bidding for his first career win at The Senior Open, while Alker is looking for his fourth victory in 2022.

“Just look at the leaderboard, some top names right behind me,” Broadhurst said. “I’m under no illusions, I’m going to have to go out and shoot a number tomorrow.

“I don’t think the forecast is particularly good. I don’t mind the wind and the rain is OK if it’s not blowing but if you get both, it’s brutal. But we’ll see tomorrow.”

Four-time Senior Open champion Bernhard Langer (70) of Germany resides at 5-under, while Dodd (71) is at plus-2.

Alex Cejka carded the lowest round of the tournament with a 64 on Saturday. The German is tied for 15th place at 3 under.