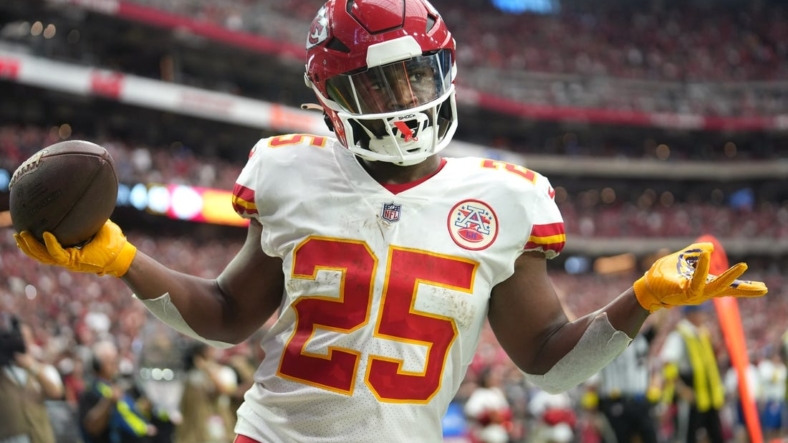 Patrick Mahomes threw for five touchdowns and the Kansas City Chiefs racked up 488 yards of total offense as they cruised past the Arizona Cardinals 44-21 on Sunday in the season opener for both teams in Glendale, Ariz.

The Chiefs, who have appeared in the AFC Championship Game in each of the past four seasons, won their eighth consecutive season opener.

Mahomes, who has played in the last five of those openers, moved the team with ease all afternoon, completing 30 of 39 passes for 360 yards. He was replaced by Chad Henne with just over five minutes remaining in the game.

All six of Kansas City’s touchdowns came in the red zone. Mahomes connected with Clyde Edwards-Helaire twice, and also found Travis Kelce, Mecole Hardman and Jody Fortson once. Rookie running back Isiah Pacheco added a 3-yard touchdown run and ended up leading the team in rushing with 62 yards on 12 carries.

Kansas City started fast and built a 23-7 lead at halftime. Mahomes had three touchdown passes, two to Edwards-Helaire and one to Kelce.

James Connor provided Arizona’s only points of the first half with a 2-yard rushing touchdown.

Following Connor’s score, Mahomes led the Chiefs on an 11-play, 75-yard drive that ended with Edwards-Helaire’s 4-yard touchdown reception and a 20-7 lead.

Kansas City kicker Harrison Butker suffered an ankle injury on the kickoff after the team’s first touchdown and safety Justin Reid took over. He hit one extra point and missed one and booted three kickoffs into the end zone for touchbacks.

Butker returned late in the first half and was successful on a 54-yard field goal with two seconds remaining.

Arizona showed some life in the fourth quarter, as Kyler Murray threw a pair of 6-yard touchdowns to Marquise Brown and Zach Ertz. Murray finished with 193 yards on 22-for-34 passing in addition to 29 rushing yards on five carries.