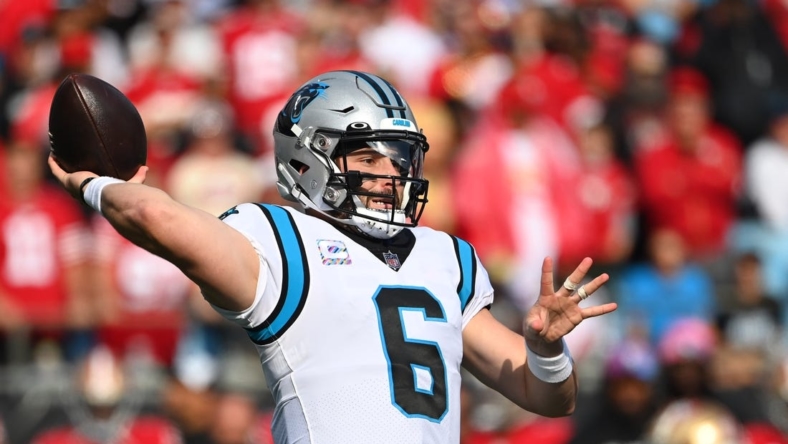 Carolina Panthers quarterback Baker Mayfield was wearing a walking boot when he met with reporters after injuring his left ankle in Sunday’s 37-15 loss to the San Francisco 49ers in Charlotte, N.C.

Mayfield limped into the locker room with 11 seconds left in the first half after a player fell on his ankle. Despite the injury, Mayfield played most of the second half until PJ Walker (5-for-6, 60 yards) came on to finish the game.

“A little painful right now,” Mayfield told reporters after the game. “I’m not real sure exactly what it is. We’ll examine that tomorrow and find out. So right now I’m managing the pain and learning to step in the boot.”

If Mayfield isn’t available to play against the Los Angeles Rams next Sunday, Walker — who is 2-0 as a starter for Carolina — will likely get the call.

Mayfield, who has struggled this season, completed 20 of 36 passes for 215 yards and no touchdowns and an interception returned for a touchdown. Mayfield’s 16.6 Total QBR is the second worst by a quarterback in the first five games of a season, ahead of only the Raiders’ JaMarcus Russell in 2008.