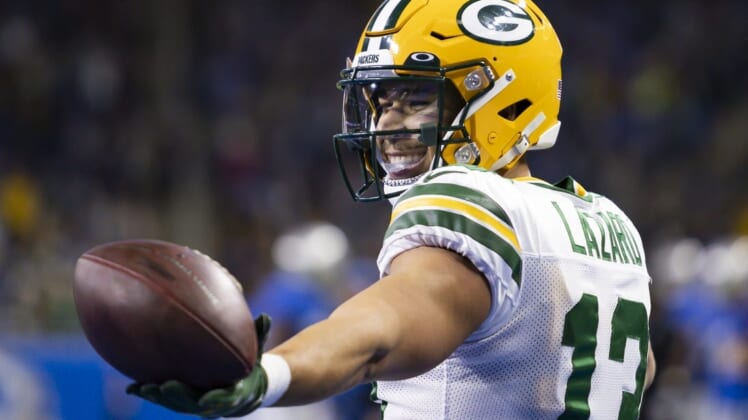 Aaron Rodgers won’t be losing all of his key wide receivers in 2022.

After being absent from the team’s minicamp last week amid speculation he was seeking a long-term contract extension, Allen Lazard signed his restricted free-agent tender on Monday.

NFL Network reported earlier Monday Lazard’s intention to sign his tender worth nearly $4 million next season. He later confirmed the news by tweeting a photo of him inking the agreement.

Lazard, 26, comes off his best statistical year in his fourth NFL season. In a career-high 13 starts (15 games), he posted 40 receptions for 513 yards along with eight touchdown catches. He ranked second on the team in both receiving yards and TD receptions behind five-time Pro Bowler Davante Adams.

In 42 career games (25 starts), Lazard has 109 catches for 1,448 yards and 14 touchdowns with Green Bay. The 6-foot-5 wideout was originally signed as an undrafted free agent (Iowa State) by the Jacksonville Jaguars in 2018. The Packers snagged him off the Jaguars’ practice squad later that December.

With Adams (123 catches, 1,553 yards, 11 TDs in 2021) gone after engineering a trade to the Las Vegas Raiders this offseason — plus two other free-agent departures (Marquez Valdes-Scantling to Kansas City Chiefs, Equanimeous St. Brown to Chicago Bears) — the Packers will also have rookie wideout Christian Watson in the mix for targets. Green Bay traded up to select Watson out of North Dakota State in the second round (34th overall pick) in April’s draft.