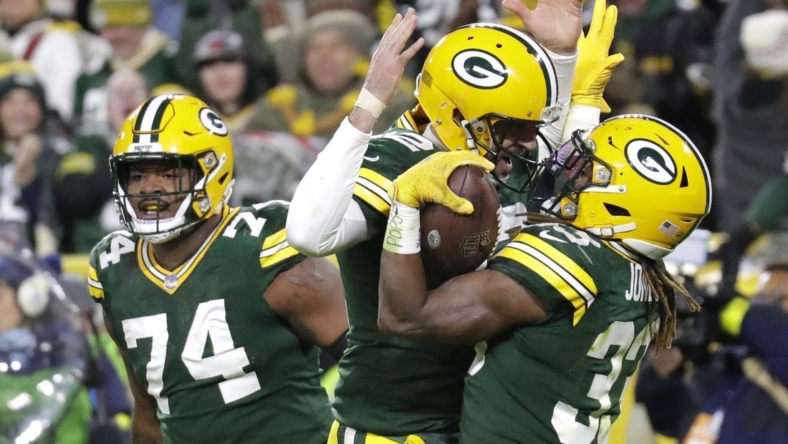 Mason Crosby kicked a 28-yard field goal with 3:06 left in overtime to lift the host Green Bay Packers to a dramatic 31-28 victory over the Dallas Cowboys on Sunday.

Aaron Rodgers threw three touchdown passes to rookie Christian Watson, and the Packers rallied from a 14-point, fourth-quarter deficit to spoil Mike McCarthy’s return to Lambeau Field. The Cowboys’ coach won a Super Bowl with Green Bay during his tenure from 2006-18.

Aaron Jones rushed for 138 yards and one touchdown and Rodgers completed 14 of 20 passes for 224 yards as Green Bay (4-6) snapped a five-game losing streak. Watson had four receptions for 107 yards and Rudy Ford intercepted two passes for the Packers.

Dak Prescott was 27-of-46 passing for 265 yards, three touchdowns and two interceptions for Dallas (6-3). CeeDee Lamb established career bests of 11 receptions and 150 yards while tying his high of two touchdowns for Dallas.

Tony Pollard rushed for 115 yards and one touchdown while being the main running back with Ezekiel Elliott (knee injury) out for the second straight game. Dalton Schultz caught a touchdown pass for the Cowboys.

Dallas failed to convert a fourth-and-3 from the Packers’ 35-yard line on its overtime possession.

Rodgers’ 36-yard pass to Allen Lazard to the Dallas 20 was the big play to set up Crosby’s winning kick.

Dallas scored two third-quarter touchdowns to take a 28-14 lead. Pollard scored on a 13-yard run with 7:14 remaining, and Prescott tossed a 35-yard touchdown pass to Lamb with 2:47 left.

The Packers moved within 28-21 when Rodgers converted a fourth-and-7 throw to Watson for a 39-yard score with 13:23 remaining in the game.

The two teamed again with 2:29 left when Watson caught a tying 7-yard scoring pass to cap a 10-play, 89-yard drive.

In the first half, Prescott hit Schultz on a 5-yard touchdown pass with eight seconds left to tie the score at 14.

Dallas also scored the game’s first touchdown, with Prescott hitting Lamb from 3 yards out with 9:52 left in the second quarter to cap a 17-play, 83-yard drive.

Ford’s second interception of the half set up a 12-yard run by Jones that gave the Packers a 14-7 lead with 1:42 left.