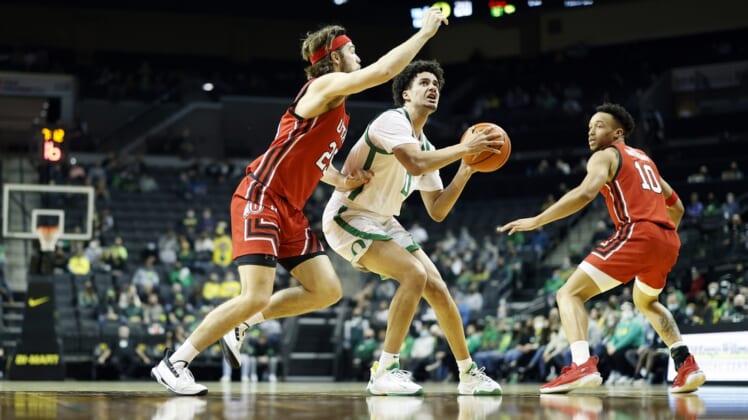 Will Richardson scored 23 of his career-high 26 points in the second half as Oregon rallied for a 79-66 victory over Utah on Saturday night in Pac-12 play at Eugene, Ore.

Jacob Young recorded 13 of his season-high 22 points in the second half as Oregon (8-6, 1-2 Pac-12) defeated the Utes for the eighth consecutive time and 17th in the last 18 meetings. De’Vion Harmon added 11 points and N’Faly Dante collected 10 rebounds for the Ducks.

Branden Carlson scored 15 points, and Marco Anthony added 14 points and eight rebounds for Utah (8-6, 1-3). Lazar Stefanovic had 10 points for the Utes, who have lost six of their past nine games.

The Ducks were in action for the first time since defeating Pepperdine on Dec. 21. They were slated to host Colorado on Thursday but the game was postponed and rescheduled for Monday due to the Buffaloes’ COVID-19 issues.

Richardson made a career-best five 3-pointers (in six attempts) and Young hit 3 of 5 as Oregon was a superb 10 of 19 from 3-point range. The Ducks shot 55.6 percent from the field and had a 22-6 edge in fast-break points.

Utah led 40-31 after Both Gach knocked down a 3-pointer with 18:17 left in the contest. Oregon responded by outscoring the Utes 48-26 the rest of the way.

The Ducks started the comeback with a 17-2 burst as Richardson scored eight points and Young had seven. Richardson capped the run with a 3-pointer to give Oregon a 48-42 lead with 14:42 left.

Utah’s Lahat Thioune converted a layup before Richardson’s jumper and Dante’s dunk pushed Oregon’s lead to 10 with 5:22 to play.

Carlson had nine first-half points as Utah led 35-29 at the break. He ended the half in style by banking in a running 30-foot shot as time expired.