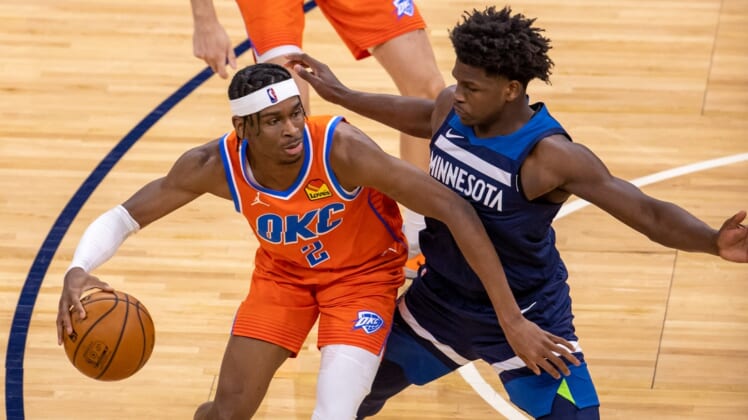 The Oklahoma City Thunder and Toronto Raptors are in similar positions.

Both are currently out of the playoff picture, though they remain in striking distance of a top-10 spot.

But the way those teams have arrived where they are, heading into Wednesday’s meeting between the clubs in Oklahoma City, is very different.

The Thunder are about where they were expected to be as they entered the first season of a rebuilding project that kick-started with a flurry of offseason trades that ridded Oklahoma City of Chris Paul, Steven Adams, Dennis Schroder, Danilo Gallinari and others.

The Thunder have played above expectations for much of the season. But with the recent injury to Shai Gilgeous-Alexander and the decisions to sit down Al Horford for the remainder of the year and take Mike Muscala out of the rotation, Oklahoma City comes into Wednesday’s game having lost three in a row and five of seven.

The Raptors, though, had much higher expectations after making the playoffs seven consecutive seasons, making it out of the first round in each of the last five and winning the 2019 title.

Toronto still has a chance at a playoff spot, entering Wednesday night’s action two games out of the 10th spot in the Eastern Conference.

But the sense of urgency for the Raptors is growing, as they enter the game in Oklahoma City having lost three in a row and 12 of 13.

“It’s really hard right now to sit here and be upset,” Toronto coach Nick Nurse said after Monday’s 118-104 loss in Detroit. “I think the guys are attentive and they’re trying. They just can’t quite move like they’d like to right now. I can’t put my finger on it other than it’s a little harder to come back from all this stuff than we realize and we’re just in the middle of it, kind of as experimental guys.

“I don’t know. I’m hoping we can get some rest and some juice back in our legs and get ready for the next one and play a lot more physical, a lot tougher mentally and physically.”

The Thunder have been competitive for most of the season, though since the All-Star break their six losses have come by an average of 18.8 points per game, with just one of those losses decided by fewer than 17 points.

“But where we are vulnerable is just in those details and it shows up on both ends of the floor and it takes time.”

The Thunder could be without Luguentz Dort for the second consecutive game after he entered concussion protocol in Saturday’s loss to Boston.