Obi Toppin goes for 35 in Knicks’ win over Wizards 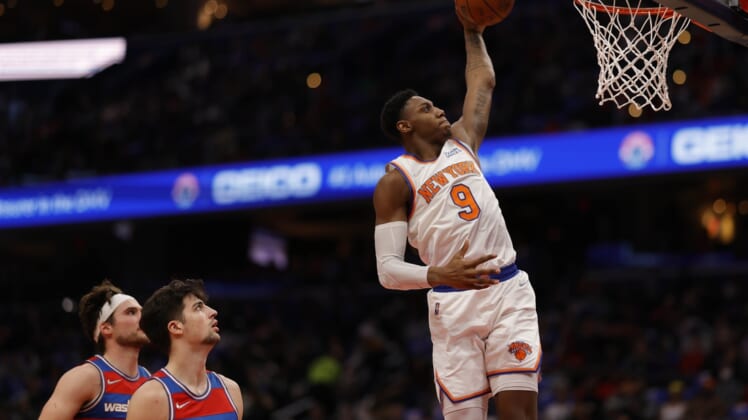 Obi Toppin scored a career-high 35 points Friday night as the visiting New York Knicks overcame the loss of star guard RJ Barrett to cruise to a 114-92 victory over the Washington Wizards.

The Knicks also overcame an early double-digit deficit in the penultimate game of the season for both teams.

Toppin shattered his previous career-high of 20 points, set Saturday and Sunday against the Cleveland Cavaliers and Orlando Magic. Toppin, who hadn’t hit more than four 3-pointers in a game entering Friday, was 6-of-9 from beyond the arc against the Wizards.

Immanuel Quickley added 23 points and 10 assists off the bench for the Knicks (36-45) while Evan Fournier had 17 points, including the go-ahead 3-pointer in the second quarter. Taj Gibson added 10 points.

Barrett scored 14 points before he suffered a sprained right knee while dishing to Jericho Sims for a dunk with 3:10 left. Barrett tried staying in the game before exiting with 1:43 remaining.

Hachimura scored five points as the Wizards opened the game on a 10-0 run, a span in which the Knicks were 0-for-7 from the field. New York got within four points twice before Washington ended the quarter with a 31-23 lead.

The Wizards twice expanded their lead to 12 points early in the second before the Knicks mounted a decisive 26-10 run to end the half. Toppin scored nine points in the run, including an individual 7-0 run that concluded the quarter and gave New York a 59-50 lead.

The Knicks put the game out of reach by opening the third quarter with a 13-0 run in which Fournier and Toppin combined to make three consecutive 3-pointers. New York led by as many as 26 in the third and never led by fewer than 15 in the fourth.