The logo of the Oakland Athletics is seen on the jersey of Lugnuts’ Cobie Vance during the first inning on Tuesday, May 4, 2021, at Jackson Field in Lansing. 210504 Lugnuts Home Opener 055a

The Oakland Athletics have called the Bay Area and the Oakland Coliseum home since 1968. But the latest negotiations with the city could be a sign that relocation is back on the table.

Oakland Mayor Carolyn G. Goodman said in May that the Athletics were considering relocation and Las Vegas seemed to be the likeliest destination. A few weeks later, team officials traveled to Las Vegas to explore potential location sites and the possibility of an MLB team playing in the city.

When Oakland presented a term sheet for a new ballpark to the A’s, the franchise immediately rejected it. The two sides then went quiet in early August, discussing potential plans behind the scenes. Before the Bay Bridge Series against the San Francisco Giants, A’s president Dave Kaval provided a significant update.

Will the Oakland Athletics make the playoffs? Dive into our MLB postseason projections

Kaval told reporters that the organization is discussing both staying in Oakland and leaving the city for Las Vegas. Parallel conversations are being held, but the team’s president also made it clear that Oakland is running out of time.

“I think it’s important that we recognize that we’re still having conversations [with Oakland]. It’s also really important to understand the parties are still working towards a mutually agreeable solution. But we’re also going to work on a parallel path in Las Vegas, because it’s important that we have multiple options. We’re really running out of time here at the Coliseum.”

The biggest sticking point in negotiations with Oakland is the economic terms, which Kaval described as the two sides being “apart” on even after months of discussions. Efforts are being made to bridge the gap and a solution is desired, but the franchise is also preparing for things to not work out with the city.

There are no concerns about the A’s leaving Oakland immediately. A lease for the Oakland Coliseum runs through 2024, giving everyone some time to figure out a resolution. But Major League Baseball likes the idea of a team in Las Vegas and isn’t afraid to either put pressure on Oakland to cave in negotiations or to encourage the Athletics to leave. 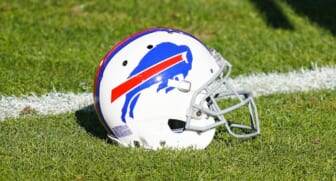 Threatening relocation is nothing new, it’s a common tactic bused by professional teams to coerce a city into using its financial resources to pay for a new stadium. But unlike the situation in the NFL with the Buffalo Bills, there’s a real possibility the A’s relocate by 2025.