Nurmagomedov can be greatest of all time, says UFC’s Dana White

UFC lightweight champion Khabib Nurmagomedov can take a step closer to becoming the greatest of all time (GOAT) in his class if he beats Justin Gaethje at UFC 254... 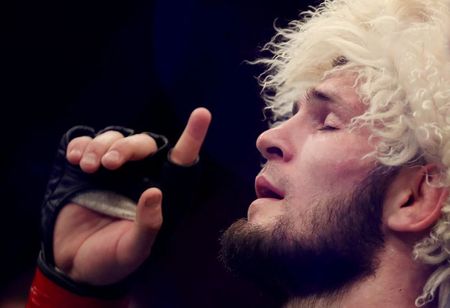 (Reuters) – UFC lightweight champion Khabib Nurmagomedov can take a step closer to becoming the greatest of all time (GOAT) in his class if he beats Justin Gaethje at UFC 254, the mixed martial arts promotion’s chief Dana White has said.

Russian Nurmagomedov will put his belt and a 28-0 win-loss record on the line on Saturday when he faces American interim champion Gaethje in a unification bout at Abu Dhabi’s Yas Island.

“Khabib is looking down the barrel of not only being the greatest to ever do it in this division… if he beats Justin, he’s the number one pound for pound fighter in the world, he’s on his way to GOAT status,” White told reporters.

“You have all the ingredients for a massive fight. You have a big superstar and a kid coming off an incredible win over a highly respected fighter and many people believe that Justin has the style to beat him.

“You think you know what these guys are going to do, but when they get in there anything is possible.”

The 32-year-old Nurmagomedov unified the lightweight title with a third-round submission victory over interim champion Dustin Poirier in Abu Dhabi last September but has not fought since the novel coronavirus outbreak.

Gaethje scored a surprise knockout win over Tony Ferguson in May to claim the interim lightweight title at UFC 249. Ferguson had been slated to fight Nurmagomedov but the bout was cancelled due to travel restrictions imposed due to the pandemic.

(Reporting by Shrivathsa Sridhar in Bengaluru; Editing by Lincoln Feast.)