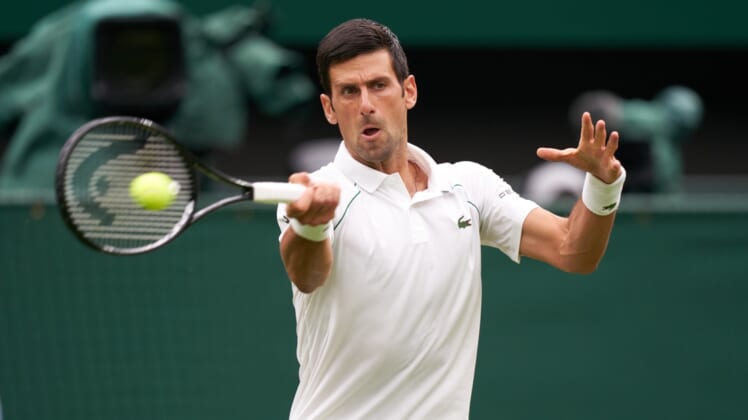 Novak Djokovic’s odds of winning a sixth Wimbledon title continue to shorten as potential roadblocks fall by the wayside.

The latest was No. 3 seed Stefanos Tsitsipas, Djokovic’s opponent in the French Open final earlier this month, who dropped his opening Wimbledon match in straight sets to unseeded American Frances Tiafoe.

Djokovic is attempting to equal Nadal and Roger Federer for the Open Era record with 20 Grand Slam titles. He is also the two-time defending Wimbledon champion after the event was canceled last year due to the coronavirus pandemic.

Federer withdrew from the French Open and failed to get past the second round of the Noventi Open, a Wimbledon tune-up. His Wimbledon will begin against unseeded Adrian Mannario on Tuesday, with Federer’s title odds lengthening from +700 at DraftKings two weeks ago to +1100 ahead of his opening match.

Still, the only two players with shorter odds are Djokovic and second-seeded Daniil Medvedev (+600), who will face unseeded Jan-Lennard Struff in his opening match Tuesday.

Tsitsipas had been the third betting favorite after losing the five-set final to Djokovic at Roland Garros two weeks ago.

That place now goes to Federer, with the next shortest odds belonging to Matteo Berrettini (+1200) and Alexander Zverev (+2000).

Djokovic is the first player in the Open Era to win all four Grand Slams twice. He is also halfway to the calendar year Grand Slam.