Novak Djokovic rallies from two sets down at French Open 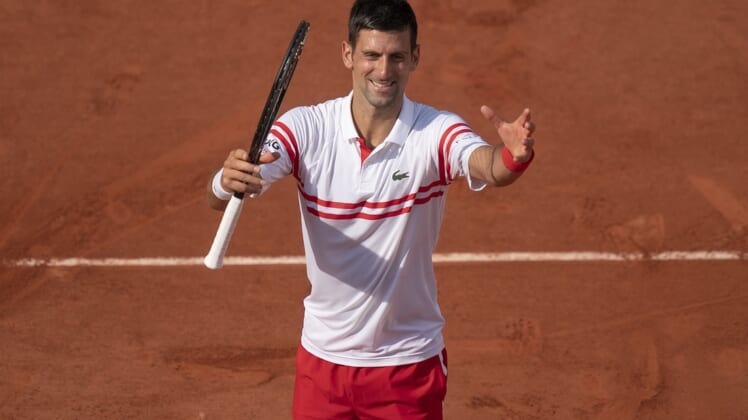 Top seed Novak Djokovic won after losing the first two sets for the fifth time in his career on Monday, avoiding his earliest exit at the French Open since 2009 in the process.

Italian teen Lorenzo Musetti won the first two sets in tiebreaks against the top-ranked Serbian, but picked up just 17 total points the rest of the way before retiring in the fifth set.

Musetti, 19, improved to 10-0 on tiebreaks this season, but couldn’t answer Djokovic after the strong start. It was Musetti’s Grand Slam debut and first time facing Djokovic.

The 34-year-old Djokovic won the French Open title in 2016. He reached the final 16 in the men’s draw for a record 12th straight year, breaking the 11-year tie he held with Roger Federer and Rafael Nadal, who each reached the milestone from 2005-16.

Nadal, who has a record 13 French Open titles, faces another Italian teen, No. 18 seed Jannik Sinner, in the day’s final match.

Next up for Djokovic is ninth-seeded Matteo Berrettini of Italy, who advanced in a walkover due to the withdrawal of Federer. The Swiss No. 8 seed cited a knee injury ahead of the match.

Also winning Monday was No. 10 seed Diego Schwartzman of Argentina, who dispatched German Jan-Lennard Struff 7-6 (9), 6-4, 7-5, although not with some struggles.

“I did many mistakes,” said Schwartzmann. “I think at the beginning of the match, he had the first set very easy. I made a comeback. Then in the second I was two times a break down. Then in the third I was up, then I was not sure to close the match. It was a weird match, but it sometimes happens. The important thing is I won in three sets. I’m just thinking positively right now.”

Schwartzman will play the winner of the Nadal-Sinner match.