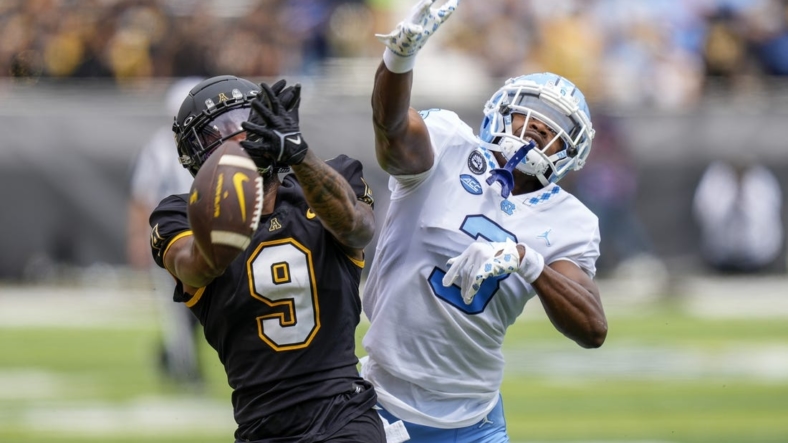 North Carolina stopped a pair of two-point conversions in the game’s final minute to hold off host Appalachian State 63-61 in a wild in-state affair on Saturday afternoon in Boone, N.C.

But Appalachian State quarterback Chase Brice guided the Mountaineers (0-1) to their fifth touchdown of the fourth quarter — a 28-yard pass to Dashaun Davis — to trim the deficit to 56-55.

Deciding to go for the win, the home side had Davis open in the end zone on the ensuing two-point conversion, but Brice overthrew him.

UNC (2-0) added another score when Bryson Nesbit returned the ensuing onside kick 43 yards, but Brice tossed a score to Kaedin Robinson to get it to two points with nine seconds left.

However, the visitors finally locked down the win when Brice was dragged down short on Appalachian State’s second two-point attempt in the last minute.

Before a venue record of 40,168 fans for UNC’s first visit to Kidd-Brewer Stadium, the third meeting between the in-state schools unfolded at a breakneck pace.

Maye scored on a run to start the second half, and Noah Burnette tacked on field goals from 47 and 44 yards for 34 consecutive points as the Tar Heels built a commanding 41-21 lead before having to hang on in the frantic fourth quarter.