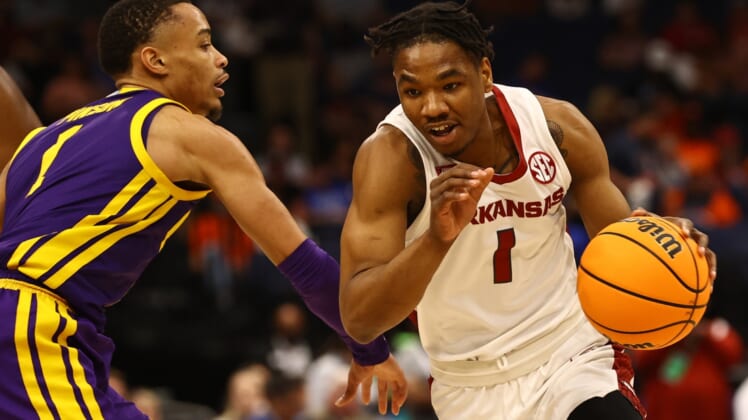 In beating the Tigers for the third time this season, Arkansas sprinted out on a 13-0 run to open the second half — part of a 19-0 stretch — and blow open the matchup against fifth-seeded LSU (22-11).

With team leading scorer JD Notae in foul trouble in the first half, Lykes scored Arkansas’ last six points — four on free throws, including a technical foul on LSU coach Will Wade — as the Razorbacks led 29-26 at halftime after an 11-4 run.

Lykes, who finished with 18 points, added a seven-point run in the contest’s final five minutes after LSU trimmed his team’s lead to 62-53 with 4:57 remaining.

Au’Diese Toney posted 22 points and 10 rebounds, and Notae had 19 points and six rebounds. Jaylin Williams collected a game-high 11 rebounds to go along with six points for the Razorbacks, who have won 15 of their past 17 games and are 16-2 all-time in SEC quarterfinal matches.

Arkansas shot 60.7 percent in the second half. Overall, the Razorbacks shot 42.1 percent.

Tari Eason scored 15 points, and Darius Days managed 14 points and 10 rebounds for the Tigers, who shot just 35.3 percent from the field. Brandon Murray added 13 points for LSU, which is 3-3 in SEC tournament history against Arkansas.

Earning a double-bye and nearly a week off after last Saturday’s regular-season finale loss at Tennessee, fourth-seeded Arkansas missed its first three shots before Notae and Toney warmed up the squad with a 12-4 lead at 15:13.

With just under 10 minutes remaining, Eason was charged with his second foul, joining Xavier Pinson, Murray and Efton Reid with two infractions. Meanwhile, Notae was assessed two fouls and played only 12 minutes in the half.

The Razorbacks endured an extended shooting drought — going over nine minutes without a bucket — as the Tigers crept ahead 22-18 at 4:04.